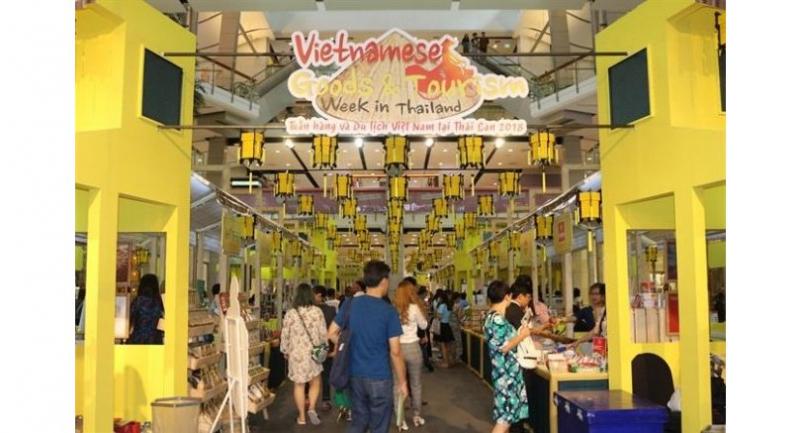 Products with high export potential are being displayed at Vietnamese Goods and Tourism Week in Thailand, which opened on August 22 in Bangkok.

This is the third year in a row the week has been organised in the city as a promotion for both retail items and tourism.

It’s part of plan called “Promote Vietnamese enterprises to directly participate in foreign distribution networks up to 2020” set out in 2015.

“In recent years, the government has opened opportunities for local businesses to further expand their networks overseas, among which Thailand is a promising market,” Deputy Minister of Industry and Trade Do Thang Hai said at the opening.

Thai Commerce Minister Sontirat Sontijirawong noted the 42 years of friendly relations between the countries. “These relations have not been just diplomatic, but also strongly involved with economics, trade, investment, culture, education and tourism.”

The countries have long exchanged goods and services, with trade volume and value increasing every year. The Thai private sector has been investing in Vietnam and importing its products, Sontijiwarong said.

Thailand is currently Vietnam’s largest trading partner in Southeast Asia, according to the Ministry of Industry and Trade’s Department of Asia-Africa Markets.

At the end of July, bilateral trade reached $9.5 billion, a rise of 14.2 per cent year-on-year. The two countries are striving to bring two-way trade to $20 billion by 2020 and ensure more balanced trade in the future.

About 60 Vietnamese firms participated in the event, of which 40 businesses exhibited goods, focusing on items with high export potential such as processed fruits, coffee, instant noodles, clothes and silk, as well as products representing the identity of the regions of Vietnam such as vermicelli, mushrooms and handicrafts.

Another 20 firms will attend a business-matching session with buying teams from Central Group Thailand.

Nguyen Long Hai, head of sales at Long Trieu Coffee Co, said this was the second year his company had brought products to the event.

Last year, the firm was unable to find any customers because the product design and brewing type did not fit with Thai tastes.

“This year, we have brought a new product, coffee beans, mostly used for espresso machines, which are more suited to Thai customers’ habits. In addition, we renovated our design to make it more eye-catching, hoping to connect with Thai partners in the business-matching session, as well as introduce a new coffee trend to Thais – filter coffee,” Hai told Viet Nam News.

Within the framework of the event, the MoIT in collaboration with the Central Group organised the Trade Connection Conference to help Vietnamese enterprises meet the Purchasing Department of the Central Group’s retail system.

Through this workshop, Vietnamese enterprises and suppliers will have a better opportunity to introduce products, learn about requirements and standards on quality and design of Thai customers, as well as exchange business methods with representatives from Central Group Thailand.

Philippe Broianigo, CEO of Central Group Vietnam and Big C Vietnam, revealed that Vietnamese goods worth $50 million-60 million were exported to Thailand through Central Group’s retail system last year and this number is expected to rise in the future.

Tourism is a new highlight of this year’s event, initiated by Prime Minister Nguyen Xuan Phuc last year, with the hope of drawing more Thai tourists to Vietnam.

The event will run until August 26 at Central World Plaza, one of the largest shopping destinations in Bangkok.