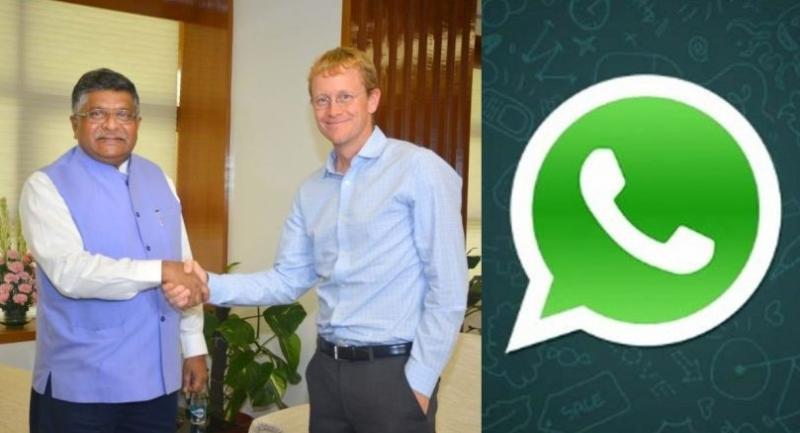 WhatsApp is leant to have turned down India's demand for a solution to track the origin of messages on its platform. It has said building traceability will undermine end-to-end encryption and affect the protection of user privacy.

The Facebook-owned firm said the messaging platform was used for all kinds of "sensitive conversations", adding that its focus now was on educating people about misinformation.

Union Information and Technology Minister Ravi Shankar Prasad had met WhatsApp CEO Chris Daniels earlier this week during which they held talks on how to curb the spread of rumours and fake news on the platform, which have lead to several cases of mob lynching and rioting across the country.

After the meeting, Prasad had told reporters that the government given three suggestions to the company — appoint a grievance officer, set up a local corporate entity in India and find a technology solution to trace the origin of fake messages circulated through the platform. He had said WhatsApp could face abetment charges if it did not take action to tackle the issue of fake news.

Daniels had declined to comment on the proceedings after the meeting.

The government has been pushing WhatsApp to find a technology solution to trace the origin of messages being circulated on its platform, which it believes can help curb crimes such as lynching.

"Building traceability would undermine end-to-end encryption and the private nature of WhatsApp, creating the potential for serious misuse. WhatsApp will not weaken the privacy protections we provide," PTI quoted a WhatsApp spokesperson as saying.

IT Ministry sources told PTI that the government had asserted that WhatsApp should continue to explore technical innovations whereby the origin could be ascertained in case of mass circulation of provocative and nefarious messages inciting violence and crime.

Having invited severe criticism over its use in spreading fake news that have led to incidents of lynching in various parts of the country, WhatsApp has of late initiated a few measures to check recurrence of such events.

In a full-page advertisement in some newspapers last month, WhatsApp listed 10 points for its users to go through to tackle misinformation.

From July 10 midnight, WhatsApp messenger application stared a new feature of labelling as "Forwarded" messages being received by a user if it has not been created by the sender. Users now know if the WhatsApp messages received by them are original posts sent by their contacts or just forwards.

To check the spread of misinformation though WhatsApp forwards, the Facebook-owned messaging platform is testing another new feature. It's going to limit the number of messages and media you can forward. In India, WhatsApp will test a lower limit — five chats at once — and also remove the quick forward button next to media messages.

In another update, the messaging platform has limited forwarding to five chats at once, and also removed the quick forward button next to media messages.

This means if a message containing media is forwarded five times from the same account, WhatsApp will disable the option to forward it further.

With Lok Sabha elections slated to be held next year, the government is taking a stern view of the use of social media platforms such as Facebook, Twitter and WhatsApp for spread of misinformation.

With a base of over 200 million users, India is the largest market for WhatsApp that has global user base of over 1.5 billion.

In response to the two notices sent by the government seeking details of actions it has taken to curb the menace, WhatsApp had told the government that it was also building a local team, and would have an India head.

Besides, the company is running an advocacy and education programme to help people spot fake news.

WhatsApp top executives, including COO Matthew Idema, met the IT Secretary Ajay Prakash Sawhney and other Indian government officials last month to outline various steps being taken by the company on the issue.

Meanwhile, Telecom Secretary Aruna Sundararajan said on Thursday the telecom department did not intend to impose blanket ban on messaging apps and platforms, but was seeking technical solutions to curb specific instances of misuse.

While the government, taking a stern view of false news circulated on social media platforms, had asked WhatsApp to take urgent measures, Sundararajan said: "... misuse is small part of it, we cannot go around blocking the whole platform. The idea is to evolve effective grievance redressal...targeted prevention or corrective action to be taken in those kinds of cases."

On the sidelines of a conference in New Delhi, Sundararajan was responding to queries over the Department of Telecom (DoT) recently seeking industry's views on technical measures that can be adopted to block mobile apps like Instagram, Facebook, WhatsApp, Telegram, etc in situations where national security and public order were under threat.