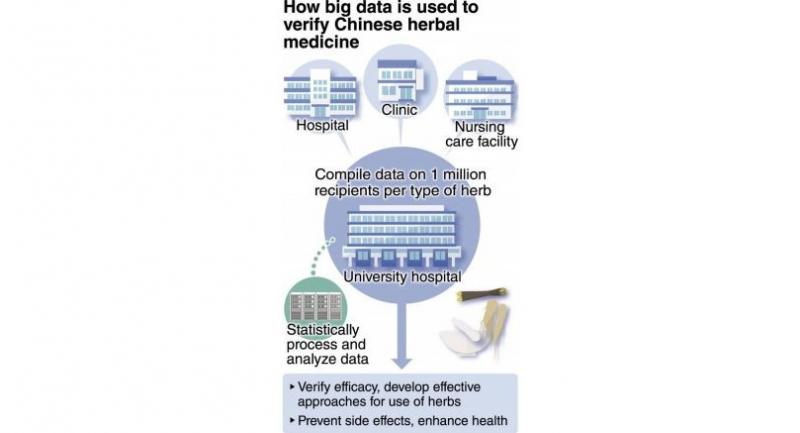 The government plans to use big data to examine the efficacy and side effects of Chinese herbal medicine, known as kampo in Japanese, as early as next year, collecting information on about 1 million recipients per medication for analysis, according to sources.

It intends to establish a scientific basis for the effective use of these medications without side effects, they said.

The Cabinet Secretariat will include the project's related expenses in its budgetary request for fiscal 2019.

Kampo herbal medicines combine various crude drugs made by drying plant roots, stalks and leaves. They can be consumed as they are or dissolved in hot water. Popular treatments include kakkonto, which is used for colds, and yokukansan, for insomnia and other symptoms. About 150 types of kampo medication are covered by public health insurance.

Medical treatments based on kampo form Japan's traditional medicine. It is said that there are tens of thousands of types of herbal medications, if traditional Chinese medicine and India's Ayurveda — both of which kampo originates from — are included.

Kampo treatments are prescribed based on patients' experiences using them, and the effectiveness of many herbs and any mechanisms that may cause side effects still have not been confirmed scientifically, according to the sources.

The government's Headquarters for Healthcare Policy and the Health, Labor and Welfare Ministry will play a major role in conducting the verification work. They will seek cooperation from hospitals, clinics and nursing care facilities across the nation, collecting information regarding the usage and efficacy of kampo treatments from patients' examination records and diaries at nursing care facilities into a big data server.

An enormous quantity of data will be anonymized before being processed into statistics. The statistics will then be used to verify the efficacy of kampo herbs and examine whether the duration, method and frequency of taking them as medications are effective in curing a disease without causing side effects.

The government also aims to use the data to find ways to prevent disease and promote health. In addition, it will examine effective combinations with Western medical science, which aims to remove the causes of disease through procedures such as surgery.

The government is considering installing a data server at Keio University Hospital in Tokyo, which houses the Center for Kampo Medicine where kampo-based treatments are carried out.Speech