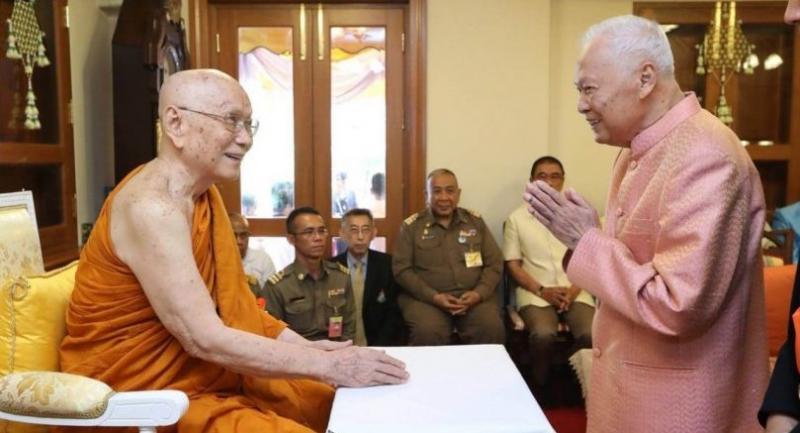 General Prem Tinsulanonda, president of the Privy Council and chief royal adviser, marked his 98th birthday on Sunday by calling on the Supreme Patriarch at Ratchabophit Temple.

Despite his years, Prem appeared to be in good health, and was able to walk without assistance. He made merit by providing a meal and alms to the Supreme Patriarch and other monks at the temple. Also present at the ceremony were his relatives, close aides and former senior commanders.

Prem was dressed in a traditional shirt in light orange colour, representing Thursday – the day he was born.

Before leaving the temple, a reporter asked if he had any comments about the country. However, Prem only responded with a smile before walking away.

The statesman, a former premier, is seen as a powerful figure in Thai politics though he holds no political positions.

Previously, it was a tradition for senior government officials and military commanders to call on Prem on his birthday at his Sisao Thewet residence.

However, Prime Minister Prayut Chan-o-cha’s request to visit the privy councillor this year was turned down by his doctor, who said it would be too risky for Prem to stand for a long time to greet his well-wishers.

A former commander-in-chief at the Royal Thai Army, he served as prime minister from March 1980 to August 1988. Prem was credited with ending a Communist insurgency and presiding over rapid economic growth.