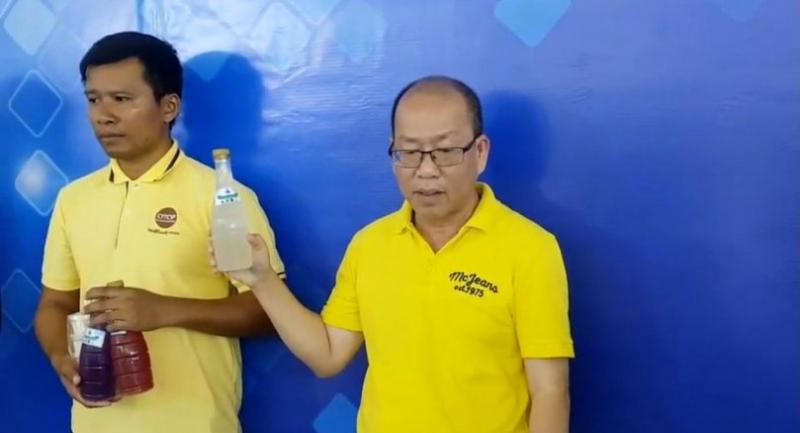 A vendor selling a drink derived from khao mak, a slightly alcoholic traditional dessert, complained on Monday he was wrongfully arrested at a “One Tambon, One Product” (Otop) fair in Buri Ram province on August 11. He was held for allegedly selling sato, a distilled alcohol concoction made from rice.

Lapon Channoi – who claimed to have been selling just the liquid from the fermented sticky rice dessert for the past two years without a problem – said four excise officials arrested him on August 11 at Soh Krao Market for the offence of selling sato without permission. He was also hit with a Bt50,000 fine. He claimed that the officials ignored his pleas and explanation that he was a registered Otop manufacturer.

Atchariya Ruangratanapong, a lawyer and chairman of a Facebook group for helping wrongly accused victims, accompanied Lapon to file the complaint at the Excise Department. He said the Constitutional Court had previously ruled that liquid from the rice used to make khao mak did not violate the Liquor Act.

Officials from the Buri Ram Excise Office had apparently failed to hand over the confiscated evidence to police, leading to suspicion that the products had been destroyed, Atchariya added. Excise Department adviser Sujittra Laohawattanapinyo, who accepted the complaint on the director-general’s behalf, said the office would summon the officials to explain themselves and also interview Lapon.

She added that the issue over the difference between khao mak and sato had to be resolved in order to avoid unnecessary arrests.

Buri Ram excise officials made headlines last month over a similar case, in which they fined a 60-year-old vendor selling khao mak. The office later defended itself, saying the woman had been fined for stocking 11 bags of sato for sale.