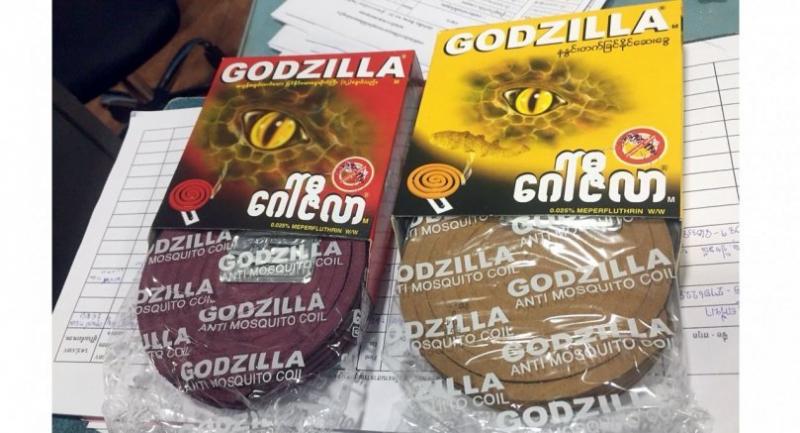 Thai authorities warned the public on Monday against Godzilla, a mosquito repellent brand imported from Myanmar, following reports that three puppies had died after inhaling its fumes.

A team of health officials led by the district chief raided the Pa Charoen market in Tak’s Mae Sot district and seized a total of 75 boxes of the repellent.

The items were seized on grounds that the Food and Drug Association (FDA) had not certified the product. Mae Sot district chief Chaiyaprukti Chienthanarak said the raid’s aim was to hunt down the source of the brand after learning that it was dangerous for humans and animals.

The seized repellent, sold in coil form, will be handed over to health authorities for further examination.

Though officials did not find the repellent at the district’s Rim Moei market, he said, shop owners have been warned against selling this brand. Officials will hold random checks from time to time, he added. The brand is reportedly popular among Myanmar migrant workers, and is sold in Bangkok’s Suksawat Market for Bt25 per box. The brand was also found to be popular in Samut Sakhon province, where there is a large community of Myanmar workers.

Pakapun Inlee, 46, from Nakhon Pathom’s Sam Phran district, said the product was sold out in her area so she had come to Samut Sakhon to buy it. She added that though the product made her dizzy, she continued using it because it was good at chasing mosquitoes away. However, the authorities should step in if it is found to be unsafe, she added.

Sorapong Homcham, 45, said this brand had been recommended by his younger brother, and though it was not certified by the FDA, he continued using it because it kept his home mosquito-free.

He also confessed to Thai Rath online that about a year ago his three puppies had died from inhaling the fumes, adding that his family members have been advising everybody to not light the coils indoors or near people or pets.

The Godzilla brand has become so popular that a copy, Godzilna, has hit the markets.