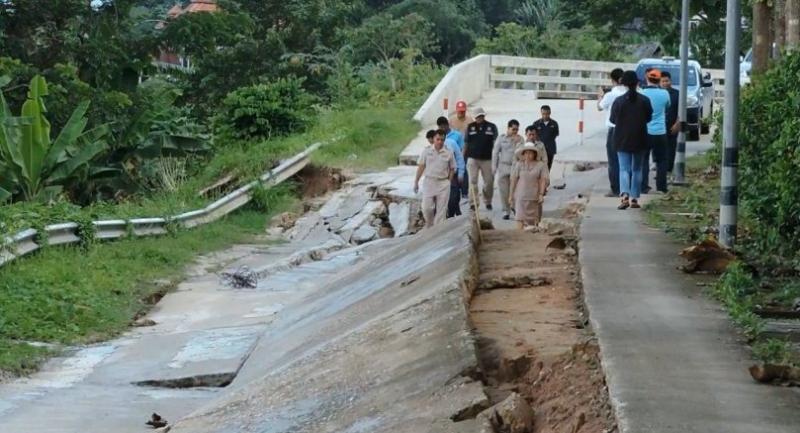 Areas downstream from six dams have been warned of possible flooding, river overflowing and landslides due to the deluge of water being released from the brimming reservoirs, Disaster Prevention and Mitigation Department (DPMD) chief Chayapol Thitisak said on Tuesday.

The situation could be worsened by abundant rain, with isolated heavy rain, forecast for all over Thailand through Friday, he said.

The six dams are the Nam Oun Dam in Sakon Nakhon, the Khun Dan Prakan Chon Dam in Nakhon Nayok, the Vajiralongkorn Dam in Kanchanaburi (also with a possible flood impact in nearby Ratchaburi), the Kaeng Krachan Dam in Phetchaburi, the Pran Buri Dam in Prachuap Khiri Khan and the Rajjaprabha Dam in Surat Thani.

All the DPMD’s provincial offices and related agencies covering the at-risk areas have been instructed to prepare manpower and machines to handle possible flooding, river overflowing, landslides and other impacts due to the large amount of water released from the dams, Chayapol said.

The department noted that 11 rivers and waterways had also been placed on watch for possible overflowing during this period.

They include the Kok River in Chiang Rai, the Nan River in Uttaradit, the Yom River in Sukhothai, the Chi River in Kalasin, the Phetchaburi River in Phetchaburi, the Tapi River in Surat Thani, and the Mekong River in Nong Khai, Bung Kan, Nakhon Phanom, Mukdahan, Amnat Charoen and Ubon Ratchathani.

Moreover, six northern provinces are on extra-close watch for flooding and landslides.