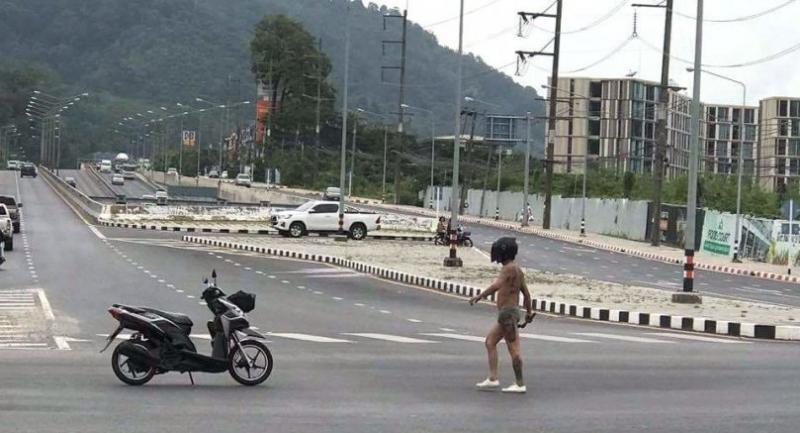 Police arrested a Thai man who may be mentally unstable, after he paraded around wearing just his underwear and carrying an 80-centimetre-long knife in Samkong on Saturday.

A picture of the man, wearing only underwear and with a helmet on his head and carrying a knife, was posted on social media today.

The man parked a motorbike in the middle of Samkong intersection and walked around, causing traffic mayhem.

Phuket City police chief Colonel Sompong Thiparpakun commented: “The incident happened on Saturday at about 5pm. The man is a 37-year-old from Phuket, and he came with police to Phuket City Police Station. He was only wearing underwear and was carrying an 80-centimetre knife. He was shouting out loud and appeared intoxicated.

“He told us that someone was going to attack him. He was swinging the knife around like he was fighting with someone.

“The man was apprehended and charged with drinking in public, being intoxicated and behaving in a riotous manner. Also, carrying a weapon in public without reason.

“On Monday he was taken to Vachira Phuket Hospital for further assistance.”