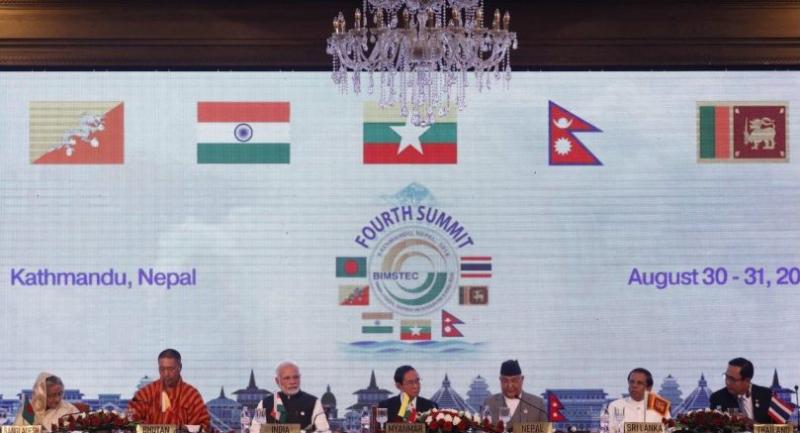 Leaders from the seven-nation regional grouping emphasized the importance of exploring multiple avenues of connectivity, ranging from physical to digital platforms in Kathmandu summit on Thursday./AFP

The heads of state and the government of the seven-nation regional grouping reiterated the need for enhancing connectivity within the member states at the inaugural session of the 4th Bay of Bengal Initiative for Multi-Sectoral Technical and Economic Cooperation (BIMSTEC) summit in Kathmandu on Thursday.

Addressing a formal session at an event in Hotel Soaltee Crowne Plaza, the leaders emphasized the importance of exploring multiple avenues of connectivity, ranging from physical to digital platforms.

Even though the regional institution has 1.6 billion population representing 22 percent of the world population, and has combined GDP of around $2.8 trillion, its regional trade amounts to a meagre five percent, highlighting the need for enhancing deeper cooperation within the member states. Of the five percent, trade between India-Thailand and Thailand-Myanmar covers a substantial chunk.

Prime Minister K P Sharma Oli, the chair of the inaugural session, opened his 27-minutes long speech, emphasizing on BIMSTEC as a unique platform that connects the countries from South Asia with South-East Asia. Oli said the regional institution is an idea that deeper integration can unleash the economic dynamism and address the development needs of countries and people—and is a medium to accelerate social progress and promote collaboration and partnership.

"It also has to evolve as a cohesive regional grouping; an association of connected countries, connected societies and connected peoples," Oli said during his speech. The Nepali prime minister also insisted that the member states should work to liberate people from the clutches of poverty, adding that the dream of prosperity will falter if the regional grouping fails to defeat the darkness of poverty.

Oli called on the member states to stand united to defeat terrorism in all its forms and manifestations, highlighting that the region is not immune from dangers of terrorism, organised crime, drugs trafficking, human trafficking, and money laundering among others.

"We [India] can host meetings of the member states for pushing the agenda of coastal shipping and motor vehicle agreement," he said.

Modi also pledged to set up the Centre for Bay of Bengal Studies in Nalanda University to conduct research of BIMSTEC region in the field of art, culture, and ocean law.

Drawing attention to the region's growing vulnerability against natural disasters, the Indian leader also welcomed BIMSTEC Multi-national Military Field Training Exercise and conclave of Army Chiefs, which is scheduled for the second week of September in Pune.

"This region is linked with Himalayas and Bay of Bengal and faces challenges posed by natural calamities time and again. We should extend humanitarian cooperation and disaster relief and for this, we need to cooperate and coordinate with each other," Modi said.

Bangladeshi Prime Minister Sheikh Hasina said that the prosperity of the BIMSTEC member states is only possible through reforms in politics and economic development. BIMSTEC member states need to promote people-to-people contact by giving special priority to culture and public health, she said.

"It is not possible to achieve our objective by a single country," Wangchuk said. "We need a collaborative effort to resolve our problem while highlighting the importance of connectivity among the people of this region."

Under the transport connectivity, a trilateral highway connecting India, Myanmar, and Thailand with the East-West Economic Corridor of the ACMES (Thailand, Laos, Vietnam, Cambodia and Myanmar) countries and acceleration of BIMSTEC motor vehicle agreement has been proposed. Likewise, under maritime connectivity, the Thai leader urged member states to accelerate the internal process to complete the signing of the BIMSTEC Coastal Shipping Agreement by 2019.

Thailand also showed a keen interest in linking Ranong Port in the West of Thailand with Chittagong Port in Bangladesh as a pilot project.