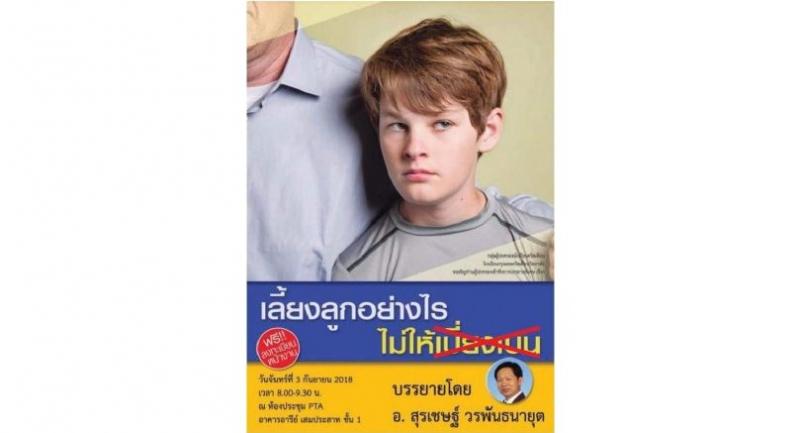 Bangkok Christian College has offered an apology for using the phrase “sexual deviation” to describe transgenders but insists it will host a controversial seminar as planned.

The controversy surfaced as gender-diversity groups on Thursday denounced plans by the all-male school to host a seminar for parents on the theme of protecting their children from “sexual deviation”.

The college is backtracking on their language but have no apologies for suggesting parents should be able to impose expectations on their children to identify with the gender they were assigned at birth.

“Bangkok Christian College would like to express an apology that the school’s forum titled, ‘How to raise a child to not be sexually deviated’ causes misunderstanding,” the school wrote on its Facebook page.

“We don’t intend to impose hatred or disgust on sexually diverse students or sexually diverse people,” said Chatchai Charuwatee, a member of the school’s parents association that co-organised the forum.

The seminar, scheduled for September 3, is exclusively for parents of the school’s students and aims to attract 20-30 people, he said. Parents should be able to raise their children in a way that causes them to identify with their (birth-assigned) biological sex, he insisted.

“I accept and respect LGBT people, but that doesn’t mean I encourage my son to be one,” he said.

“I think the parents should know that sexual deviation is not an illness,” said Wittaya Wuttikriengkrai, who is scheduled to deliver the lecture at the forum. “I want to remind them that even if their son is not a straight man, we must love them. Even if they have a problem and are not what we expected, we shouldn’t love them less,” he said.

The Facebook page carries an advertisement for the event.

The ad copy reads: “Sexual deviation often comes from the environment in childhood, especially from the family. How does sexual deviation affect the children and how can we prevent it?”

But the forum’s theme stigmatises LGBT people, said the gender diversity group opposing the seminar. The forum may also violate the Gender Equality Act 2015, they added.

The law forbids any act that causes division, discrimination or limitation of any rights and benefits due to a person’s sexual orientation.