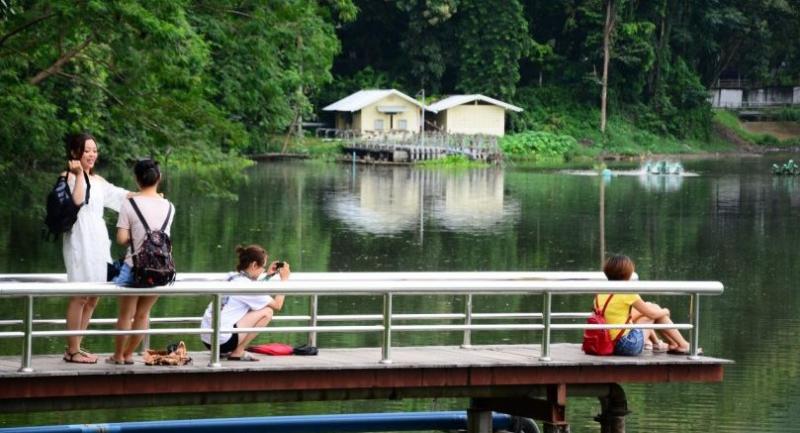 THE CHARM and beauty of Chiang Mai, the capital of northern Thailand, has made the province not only a must-see destination but also a golden nest for foreign investors – especially Chinese seeking business opportunities.

Take Chinese entrepreneurs like Cherry and Zong Dan, for example. Having fallen for Chiang Mai’s charms, they opted to start their first overseas business in the province. Cherry, a 35-year-old entrepreneur from Chengdu, decided to invest in a guesthouse in Chiang Mai’s Muang district a few months ago, after finding her previous job as a writer on property issues was no longer satisfying.

She chose Chiang Mai after the city left a deep impression on her when she first visited five years ago.

“Chiang Mai is not far from my hometown, has nice weather, and the people are warm and friendly,” Cherry said.

She rented an eight-room guesthouse on Sirimangkalajarn Road, and partnered with the owner of the building, since Thai laws do not allow her to fully own a business here.

Cherry is currently staying in Thailand on a 60-day tourist visa while she applies for a work permit. It’s a complicated process and expensive, she admits; she even had to return briefly to China to retrieve some required documents.

As a Chinese national, Cherry knows her compatriots prefer to stay in a hotel where staff speak their language, and so she hired Thai staff who can speak some Mandarin.

Her guesthouse boasts many return customers. To boost her sales, she turned to the largest online travel agency in China, Ctrip.

Cherry’s initial investment was around Bt1.5 million and she expects to make it back in the next two years despite strong competition from an abundance of tourist accommodation in Chiang Mai these days.

Asked her advice for other Chinese entrepreneurs considering investing in Thailand, Cherry said people could invest in property to live in or rent out – but she wouldn’t advise anyone to run a guesthouse as she does.

Cherry thinks the number of Chinese tourists coming to Thailand will continue to rise because prices are low and a high-speed train will soon be connecting the two countries.

Asked about anti-Chinese investment sentiment in Thailand, Cherry said, “I hired four Thai staff. They now have jobs and can help to grow the Thai economy.”

Zong Dan moved from Saraburi, where she was a Chinese volunteer teacher two years ago, to Chiang Mai because she likes the city.

She then became the co-owner of the famous Chinese food shop Miss Liangpi in a soi on Nimmanhaemin Road after seeing a business opportunity there. At the time, there were only a couple of Chinese food shops in the city.

With the aim of serving Chinese food to their tourist compatriots, Zong and her husband, whose hometown is in Xi’an in Shaanxi province, decided to open a small shop to sell the signature dish of Xi’an – Liang pi, or cold-skin noodles.

Like Cherry, Zong at first found it difficult to set up the business, including identifying the best location for her shop and then registering her business, which took around three months. Zong, who runs the shop with a Thai partner, now has a work permit in hand.

Her shop was ranked one of the most popular in 2017 by a Chinese review website and now boasts Chinese, Western and Thai customers.

Sales this year, however, have not been as good as last year, Zong says, but the business still makes a healthy profit. Their plan is to run the shop for four or five years and then take stock before deciding their next move. The cases of Cherry and Zong match initial findings in an ongoing research project being conducted by academics in the Faculty of Mass Communication, Chiang Mai University.

Supported by the Thailand Research Fund, the “Chinese Investment and its Impact to Tourism Security of Northern Thailand” study spoke to 200 Chinese visitors about their interest in investing in Chiang Mai. They aim to interview another 200 Chinese visitors.

The top three motivating factors drawing them to invest in the province were the beautiful landscape and diversity of the city, the variety of tourist attractions and growth potential, Sunanta Yamthap, a researcher in the group, said.

The researchers also interviewed Thai entrepreneurs and workers who were affected by Chinese investment.

They found that Thai small-scale businesses such as elephant camps or spa and massage facilities are now facing fierce competition and dropping revenues.

An owner of the Maesa Elephant Camp in Mae Rim District told the researchers that Asian tourists love watching elephant shows, so Chinese investors had rented or bought an elephant or two and claimed to be operating an elephant camp that they sold as an attraction to Chinese tour agents.

The Thai elephant-camp owner was sceptical that the Chinese operators were following the regulations required for animal welfare.

Spas and massage businesses are also very popular among tourists these days, and so Chinese tour agencies will often include a particular shop in their tour programmes. Masseurs then flock to that shop to guarantee they earn money, researchers said.

In the property sector, Chinese investors have rented resorts or properties from Thais on one- or two-year contracts. Some have even taken over the properties and opened them for Chinese tourists to stay there, said Thamnoon Tunchuleeporn, general manager at Brique Hotel in Muang District. He expressed concerns about whether the Chinese operators could legally run such accommodations, and whether tourists’ safety was being placed at risk.

Chinese were also the only nationality to increase their numbers in Chiang Mai from 2014 to 2016 – with an almost 43 per cent increase – while other nationalities decreased, according to the Intelligence Centre of Tourism Authority of Thailand (TAT).

“When the market grows, demand grows, as does investment. Chinese people feel happier talking with Chinese speakers,” a TAT official who asked not to be named said.

Chinese people are investing in every country in the world, noted Yos Santasombat, a professor of Anthropology at Chiang Mai University. China’s official “going out” policy is spurring investment, and not just in Thailand, he said. “They are coming to explore the possibility of investment. If there is a better situation or a better deal or a better chance elsewhere they will go there,” said the professor, who has conducted several studies into Chinese capitalism and the impact of China in the Mekong region.

“In terms of tourism and agricultural investment, Chiang Mai and Thailand have potential – and that’s why many Chinese investors come here,” Yos said.

Since we cannot avoid their investment, the professor suggested that Thais learn from the Chinese and adapt, instead of feeling resentful or anxious about Chinese people doing business in Thailand. Otherwise, he said, we might be left behind.

The Chinese “are very active, diligent and work very hard, so you need to create a new value in Thai society so that people work as hard as the Chinese”, he said.

Despite the trade war between China and United States, Yos said Chinese investment in Southeast Asia, which is now of small and medium scale, would continue and increase because there is a lot of pressure inside China.

Doing business in China might not be as good as it used to be, although the trade war will affect large-scale investment, he said.

But Yos also sounded a note of warning about unregulated foreign investment.

“The point is, how can we find measures to curb [small scale] investors, because they tend to invest in uncontrolled locations or where official oversight is inefficient,” he said.