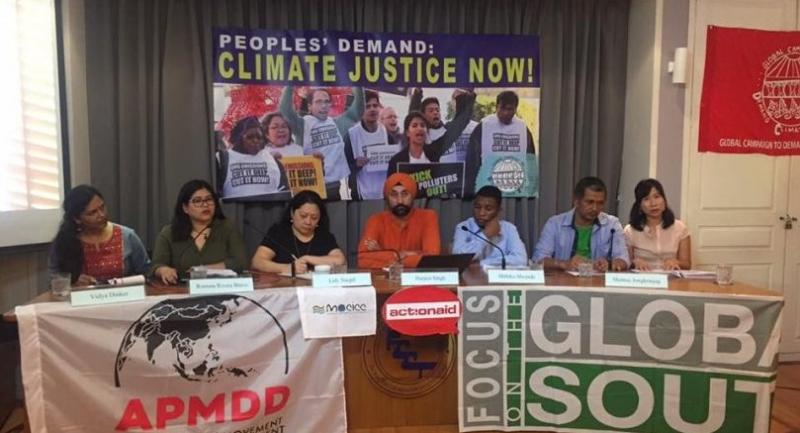 Environment activists from developing countries speak at the Foreign Correspondents’ Club of Thailand yesterday ahead of the UN conference to be held today.

Activists say inequality is built into negotiation system, smaller countries being drowned out

AN UNDEMOCRATIC and unfair negotiation mechanism in the United Nations Framework Convention on Climate Change (UNFCCC) will eventually lead to the failure of the landmark Paris Agreement, civic groups said yesterday. As the UNFCCC opens a meeting on climate change in Bangkok today to finalise the Paris Agreement’s implementation guidelines for the upcoming 24th Conference of the Parties (COP24) in Poland, climate activists say flaws threaten to sabotage efforts to keep the global rise in temperature to 1.5 degrees Celsius.

Members of climate justice advocacy organisations from developing countries told the Foreign Correspondents’ Club of Thailand (FCCT) yesterday that the inequality built into the climate negotiation system, and conflicts of interest among negotiators, are hindering the global effort to prevent and mitigate environmental catastrophe.

Lidy Nacpil, coordinator of the Asian Peoples Movement on Debt and Development, said major problems with the climate negotiation mechanism were its undemocratic voting system, unequal participation among stakeholders, and the hidden agendas of powerful players.

“First of all, the voting system in the UNFCCC’s climate negotiations is not truly democratic, as even though each country has one vote, some countries have far more influence and power than others,” Nacpil said.

“So the voices of smaller and poorer countries, such as island nations and developing countries, which have less influence and power in the negotiation forum, are often drowned by louder and more powerful actors. This is despite the fact that these countries are more vulnerable to climate change and suffer more significant impacts from climate disasters.” Another problem, she said, is the lack of participation by activists and victims of environmental change, who are often denied even the chance to partake as observers at climate negotiations.

This meant they had limited power to affect the agenda for discussions, Nacpil said.

“We are also concerned about the conflict of interests within the climate change forum, as it is clear that some members of the global negotiations have close ties with the fossil fuels industry. Moreover, lobbyists for fossil-fuel conglomerates also have a strong influence over the forum,” Nacpil said.

“These problems are weakening the global efforts to cut down greenhouse gas [GHG] emissions and save the world from extreme climate change once the global temperature rises beyond the tipping point.”

Nacpil warned that unless smaller countries, local communities and climate justice advocates were given more power at the climate negotiation table, the Paris Agreement’s goal to cap the global temperature rise at 2C will fail.

Vidya Dinker, president of the Indian Social Action Forum, highlighted the urgent need to meet the 2C target by noting that India, along with many other parts of the world, are already suffering climate disasters triggered by the 1C rise in global temperature.

“I hope that there will be constructive and effective mitigation measures from the climate conference in Bangkok, as the citizens of developing countries have already suffered serious impacts from climate change,” Dinker said. Meanwhile at another FCCT press conference, Patricia Espinosa, UN Climate Change Secretariat executive secretary, said the Bangkok meet was being held to prepare the implementation guidelines of the Paris Agreement, which will be discussed for adoption at COP24 in Poland in December.

“It will be critical for negotiators in Bangkok to produce solid text-based output that can function as the basis for the concluding negotiations in Katowice and be turned into the final implementation guidelines of Paris Agreement at COP24, as the texts capturing progress to date are not yet refined enough for this purpose,” Espinosa said.

“With only six days for negotiations in Bangkok, UN Climate Change is carefully coordinating demand to fully support countries in their important task.”