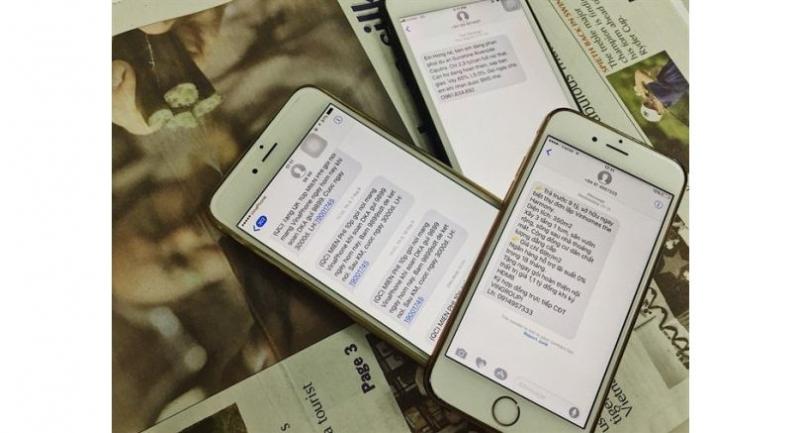 This is just one of the many text messages that pop up on the phone screen of Minh Huong in Hoan Kiem district every day.

These advertisements encourage users to try multiple services, from data packages to top-up cards, and from English courses to new real estate projects in town.

"They (the network providers) promised to start blocking all spam calls and messages from 2017, but nothing seems to have changed," she said.

Huong has two phone numbers with the biggest network providers in the country, Vinaphone and Viettel.

While spam from Viettel invite her to join Keeng, a music social network, watch movies online or use a new mobile money application, Vinaphone advertises data packages, quiz games (which promise rewards far bigger than the cost of a text message) and a variety of promotions.

"It's funny that most of the messages are sent by the telecommunications providers themselves. If you want to stop receiving the messages, you have to send a message to unsubscribe from services you never registered for," she said. "It's just ridiculous."

Spam messages, unfortunately, are not the only problem.

Thu Van in Hai Ba Trung district is pestered by many spam calls every day.

"It's crazy how much they seem to know about their target audiences," Van said.

"They know where I live, how old my children are, and offer exactly what a person like me will need or consider," she added.

Van presumed that her personal information had been traded from other organisations.

"I try to be patient, but sometimes when we are busy or the calls come early in the morning, I get so annoyed. I react angrily, and they criticise me for being impolite," Van said.

Most people interviewed said that spam calls were more irritating than messages because they don't know where they are coming from until they answer.

"They can attack you at anytime, when you are sleeping or working," complained Quoc Tuan from Hoan Kiem district.

Tuấn said all he could do was block the numbers or not pick up from unknown callers.

"I don't know where they got my phone number from. It is obviously illegal for my personal information to be traded by other people. However, I have no idea how law enforcement can deal with this type of crime," he said.

According to Vu Ngoc Sơn, deputy head of Bkav Corporation, despite blocking software, it was impossible to prevent all spam calls and messages as they did not know how many phone numbers were being used for advertising purposes.

Instead of using preactivated sim cards, companies have switched to using registered numbers for telesales, making it difficult to tell whether an incoming call is spam or not.

"Customers do care if those numbers are registered. They consider it spam and feel harassed. At present, there is no potential solution due to the conflict between providers and customers," Son told the Thanh Nien (Young People) newspaper.

Sharing the opinion, Vo Do Thang, director of Athena Cyber Management and Security Training Centre, said that telecommunications providers had to proactively prevent spam because not many people had efficient blocking software on their phones.

"We will have to tolerate this problem until strict regulations are applied," Thang said.

According to the Viet Nam Telecommunications Agency, in 2017, providers deactivated and withdrew 24 million pre-activated SIM cards to reduce spam calls and messages.

From May, 2017, to March, 2018, 260 million spam messages were blocked. The Computer Emergency Response Center (dial 456) is in charge of receiving and recording spam messages, but is unable to stop spam calls.