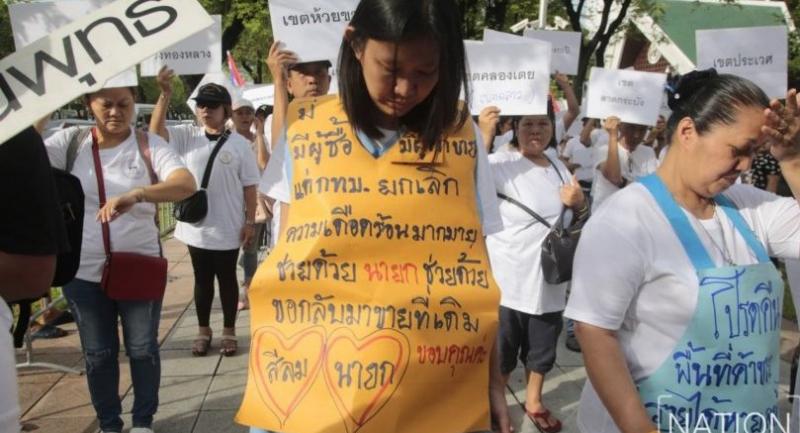 A street vendor network marched in Bangkok on Tuesday against government and city efforts to clear hawkers off footpaths.

About 200 demonstrators assembled outside the United Nations building on Rajdamnoen Nok Avenue at 7am and marched to the Public Service Centre at Government House to present a petition for Prime Minister Prayut Chan-o-cha.

They vowed to camp outside the centre until there was a response.

They want the government and Bangkok Metropolitan Administration (BMA) to scrap a policy to reopen sidewalks for pedestrians by clearing away vendors’ stalls.

Urging that a law be passed to protect street hawking, the group expressed its readiness to help the authorities maintain neatness and order.

Network vice chairman Pongsilpa Lee-in said the policy, implemented at a succession of locations since 2014, had robbed many vendors of their income.

He said every agency they’d approached in the past two years, including the BMA and Administrative Court, had yielded no result so far.

The group wants the policy revoked and traditional vending areas returned to the hawkers within seven days so its members could make a living while negotiations on other points continue.

The network said it would meet with relevant agencies to discuss alternative solutions.

It wants a law in support of footpath hawking to ensure there will be no future flip-flops in policy.