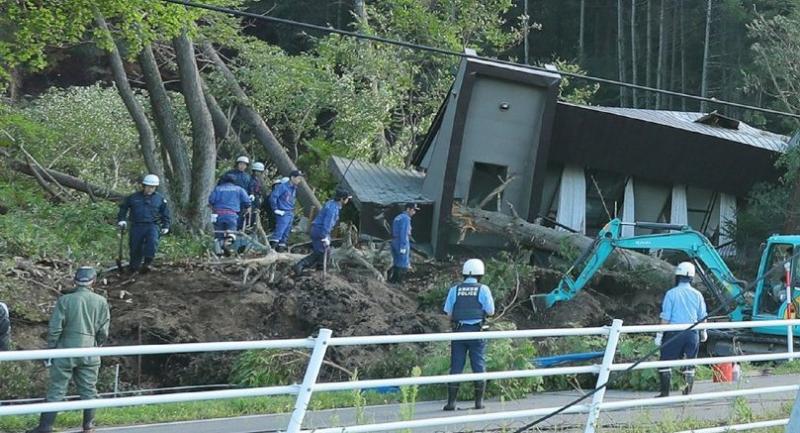 Police and rescue workers search for survivors from a house that was damaged by a landslide caused by an earthquake in Atsuma town in Hokkaido prefecture on September 6, 2018.// JIJI PRESS / AFP

No tsunami warning was issued after the relatively shallow quake, which struck 62 kilometres (39 miles) southeast of the regional capital Sapporo.

An aftershock measuring 5.3 rocked the area moments later and smaller aftershocks followed throughout the night.

The Japan Meteorological Agency warned of a slight sea level change in coastal areas as a result of the quake.

An 82-year-old man died after falling down the stairs at his home during the quake, Japanese media reported.

At least four landslides were reported after the quake, government spokesman Yoshihide Suga said, adding that six homes had collapsed.

"We urge residents in areas hit by strong tremors to heed information on television and radio and act by helping each other," Suga told a press conference.

TV footage shortly after the quake showed people coming out of their houses in the early hours of the morning following the quake.

"The government will work in unison towards reconstruction while giving the top priority to saving human lives," Prime Minister Shinzo Abe told reporters.

Officials warned of the risk of further quakes.

"Large quakes often occur, especially within two-three days (of a big one)," said Toshiyuki Matsumori, in charge of monitoring earthquakes and tsunamis at the meteorological agency.

He added the risk of housing collapses and landslides had increased in the area hit by the quake, saying: "We urge residents to pay full attention to seismic activity and rainfall and not to go into dangerous areas."

Japan sits on the Pacific "Ring of Fire" where many of the world's earthquakes and volcanic eruptions are recorded.

In June, a deadly tremor rocked the Osaka region, killing five people and injuring over 350.

On March 11, 2011, a devastating 9.0-magnitude quake struck under the Pacific Ocean, and the resulting tsunami caused widespread damage and claimed thousands of lives.

Japan is still recovering from the worst typhoon to hit the country in 25 years, which struck the western part of the country on Tuesday, claiming at least 11 lives and causing major damage to the region's main airport.