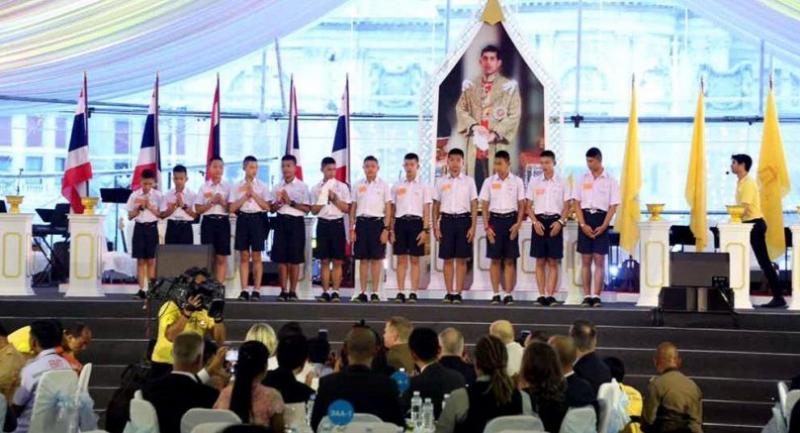 The young Thai football team whose terrifying ordeal in a flooded cave captivated the world earlier this year recounted their memories of their rescue Thursday as they visited a spectacular exhibit chronicling the drama.

The interactive showcase, in Bangkok's popular Siam Paragon mall, details the efforts made by a multi-national group of experts to get the 12 boys and their 25-year-old coach out of Tham Luang cave in northern Thailand. Among other things, it features a model of the narrow tunnel that divers had to manoeuvre the boys through as flood waters rose.

Since they were safely extracted two months ago, international and domestic interest in them has remained high, with Hollywood movie deals in the works.

Thai authorities banned reporters from speaking to the boys in a bid to help them return to normality after the harrowing experience, with media outlets required to obtain permission from the government before approaching them.

But Thursday's festivities saw the boys cast into the spotlight as they were interviewed by government spokesman Colonel Werachon Sukondhapatipak.

They will also be the focus of a night-time celebration called "United as One", with more than 10,000 people expected to attend, according to authorities.

When asked about how their lives had changed after the rescue, Prachak Sutham, the first boy who escaped the cave, said: "Things are the same, but more people know me now."

Team captain Duangpetch Promthep said most of his 300,000 followers on Instagram claimed to be his fans.

After an hour-long interview, the boys toured the exhibit, strolling past a model of the stretcher that carried them out. It held a mannequin with an oxygen face mask. Phanumas Saengdee, a member of the "Wild Boars" football club, crawls inside a prop cave at an interactive exhibition in a mall in Bangkok on September 6, 2018.// AFP PHOTO

The children ended the tour by shuffling through the narrow tunnel, hunching over to get through the exit.

Without help from the international divers, "the 13 wouldn't have survived because Thailand doesn't have that experience," said Thipwipa Aranyakasem, 83, who visited the exhibit.

Narachai Sikly, 65, who came with his wife, said he was "excited" by how the government worked with the divers to rescue the children.

"It is excellent of the government and the group (of divers)."

The junta-led government, which came into power after a coup in 2014, has received a boost of goodwill and praise from the Thai public since the rescue of the children and their coach, who has since become a monk.