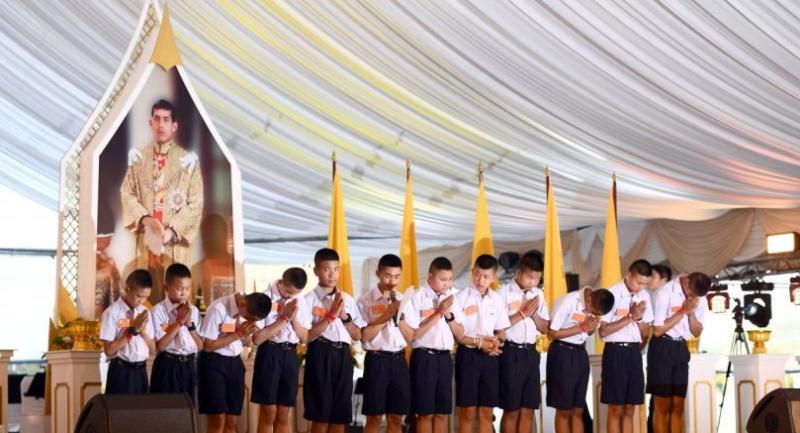 The 12 members of the "Wild Boars" football club greet attendees at a reception in Bangkok on September 6, 2018. // AFP PHOTO

IN ADDITION to the government-hosted thank-you reception for those who helped in the Tham Luang cave-rescue operation, many others will also be getting special recognition for their contribution.

His Majesty King Maha Vajiralongkorn granted the “Most Admirable Order of the Direkgunabhorn” honour to 114 foreigners and 74 Thais who were involved in rescuing the 12 Wild Boar soccer players and their assistant coach from a flooded cave in Chiang Rai, Prime Minister’s Office Minister Suwaphan Tanyuvardhana said yesterday. Thai Prime Minister Prayut Chan-O-Cha (4th-L) speaks to the members of the "Wild Boars" football club during a reception in Bangkok on September 6, 2018. // AFP PHOTO

Prime Minister Prayut Chan-o-cha will present the honours at a ceremony at Government House today, he said.

Apart from those involved in the cave rescue, 184 civil servants, police and military officers will also be presented with a souvenir pin marking His Majesty’s 66th birthday.

Suwaphan made his comments before the grand reception kicked off last night. The reception was held at the Dusit Palace Plaza under the “United as One” theme. Suwaphan said some 7,000 people attended the celebration.

“Many people said they were happy to attend this party. The government is also happy to have the chance to thank them,” he added. Three members of the "Wild Boars" football club pose with divers, who were involved in their rescue operation, during a reception in Bangkok on September 6, 2018. // AFP PHOTO

The footballers and their 25-year-old assistant coach also joined thousands of guests at the reception, including the Australian rescue team led by anaesthetist Dr Richard Harris, more than 3,000 Chiang Rai residents and some 10 rock climbers from Krabi’s Railay Bay.

The boys, aged between 11 and 16, also expressed their gratitude to His Majesty the King and everybody else who contributed to their rescue.

The boys admitted that though they were recognised more frequently – their junior striker Doungphetch Phromthep already has 300,000 Instagram followers – their lives remained pretty much the same.

They said they were now working on gaining physical strength by running, going on bicycle rides and playing football.

They also recounted their nine days as novices in a local temple, saying meditation and dhamma lessons have helped them stay calm, confident and in touch with reality. Members of Wild Boar youth soccer team who were rescued from Tham Luang cave and their coach-turned-Buddhist monk Ekapol Chantawong (R) speaks during an interview by a government official as part of a meeting with the press, at a shopping mall in Bangkok, Thailand, 06 September 2018. //EPA-EFE PHOTO

Meanwhile, an interactive exhibition “Tham Luang Incredible Mission: The Global Agenda” will continue at Siam Paragon until September 9, after which it will be taken on tour across the country.