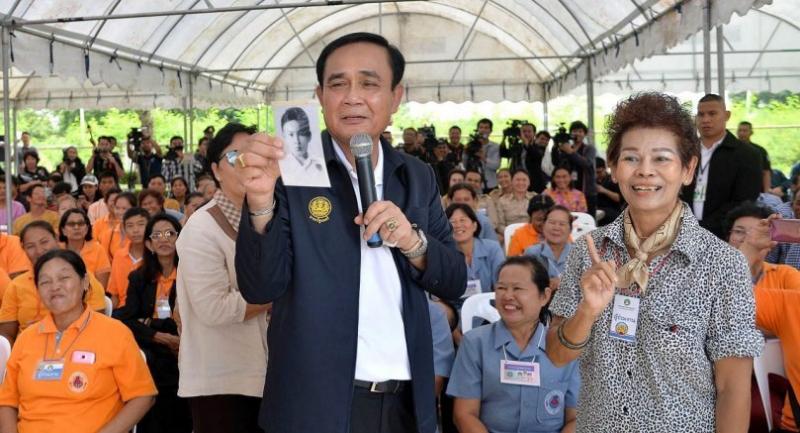 Prime Minister Prayut Chan-o-cha warned on Friday against vote-buying, saying that the practice would only lead to more corruption in government.

He urged voters to “go for a change” and help make sure that the country would get a government with good governance after the next general election, tentatively set for February next year.

“If you vote the same way like in the past, you will get the same thing. There must be a change,” said Prayut, who also heads the ruling junta National Council for Peace and Order (NCPO).

“Don’t let yourselves be bought. You have the right to vote for any person and any party you like. But if you vote for people who give you money, in the future they will try to get the money back. Nobody gives you free stuff. Don’t accept it. Promise me.”

The PM was speaking to a group of some 200 people, including community leaders, who greeted him during his visit to Lop Buri.

He also urged people not to stage street protests after the election.

“The election must lead to peace. Don’t stage protests again,” he said. “This reign must be the most peaceful.”

Prayut also said that Thailand had “wasted” more than 10 years during the political conflicts that had paralysed all the governments. The conflicts had “blocked the country’s arteries” for over a decade, he said.

When the PM asked local residents what help they wanted from his government, they replied they wanted rice subsidies. He responded, however, that subsidies were out of question, as the government was still “repaying the debt of Bt500 billion” from the previous administration’s rice-pledging project.

“We have been repaying the debt over the past four years. Budget was squandered in the past,” he said.

Meanwhile, outgoing Army commander-in-chief General Chalermchai Sitthisart said on Friday that the NCPO’s peacekeeping force, which has been in place since the 2014 coup, would see its role reduced following the relaxation of political restrictions later this month.

Police would take over the task of maintaining peace and order, although the NCPO’s peacekeeping force may be used in “certain situations, whenever it is needed”, he said.

Chalermchai said he had no plans to enter politics after his retirement. “I will have more free time for myself after retirement,” he said.