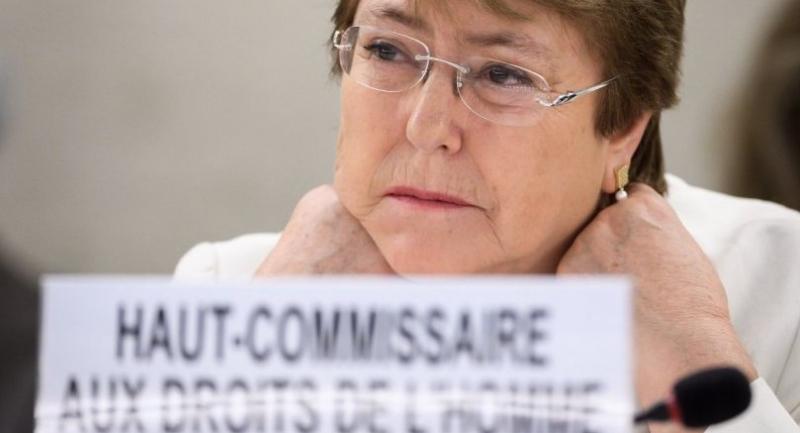 New High Commissioner for Human Rights Michelle Bachelet looks on on the opening day of the 39th UN Council of Human Rights in Geneva on September 10, 2018./AFP

Myanmar, facing international outrage over the jailing of Reuters journalists for their reporting on a massacre of Rohingya Muslims, is conducting a "political campaign" against independent journalism, the UN said Tuesday.

A fresh report from the UN rights office decried "the instrumentalisation of the law and of the courts by the government and military in what constitutes a political campaign against independent journalism".

It slammed the "failure of the judiciary to uphold the fair trial rights of those targeted".

The rights office pointed to the "particularly outrageous" and high-profile example of the conviction of Reuters journalists Kyaw Soe Oo and Wa Lone, also known as Thet Oo Maung.

Last week, a judge jailed the two -- both Myanmar nationals -- for seven years under a draconian state secrets act over their reporting of the Rohingya crisis.

Around 700,000 of the stateless Rohingya Muslim minority were driven into Bangladesh by a Myanmar army-led crackdown in August last year.

The UN report said there were many other examples of detentions and prosecutions of journalists and their sources, indicating "wider trends of suppression of freedom of expression".

According to the report, laws on telecommunications, official secrets, unlawful association, electronic transactions, import-export and aircraft have been used against journalists in a number of cases.

It pointed to one case, where three journalists were arrested in June 2017 after covering a "drug burning" ceremony in connection with the International Day Against Drug Abuse and Illicit Trafficking.

The event took place in an area under the control of the Ta'ang National Liberation Army (TNLA) in northern Shan state.

Even though the journalists were covering events unrelated to the armed conflict, they were charged under the so-called unlawful association act.

The report pointed out that the act is "routinely used to allege that any contact with an ethnic armed group is tantamount to a criminal offence".

In another case highlighted in the report, a documentary crew working for Turkish state television was last year charged under Myanmar's Import-Export Law over their use of a drone to film the parliament building in Nay Pyi Taw.

While the charges were dropped in the end, the report said the case illustrated the authorities were willing to use any legal provisions to block independent reporting on critical issues in Myanmar in "flagrant violation of the right to freedom of expression".

In Myanmar, it has become "impossible for journalists to do their job without fear or favour," it said.

UN rights chief Michelle Bachelet warned in a statement Tuesday that the situation was "hardly conducive to a democratic transition" in Myanmar.

She called on authorities in the country to "cease the legal and judicial harassment of journalists and to initiate a review of ill-defined laws that facilitate attacks on the legitimate exercise of freedom of expression".

The sentencing of Wa Lone and Kyaw Soe Oo sent shockwaves through the small community of journalists in Myanmar, a nation that had only recently started to taste democratic freedoms after nearly half a century of military rule.

In his reasoning, the judge pointed to information and contact details of armed ethnic groups found on the pair's phones.

Outraged journalists are staging protests and have started a Facebook campaign, changing profile pictures to photos of the jailed duo and sharing a logo depicting a reporter with arms outstretched, daring the authorities to come for him as well.

"We journalists, including Wa Lone and Kyaw Soe Oo, are just doing our jobs," said Nyan Hlaing Linn, one of the instigators of the campaign. "If collecting information is a crime then they should come and #arrestmetoo."