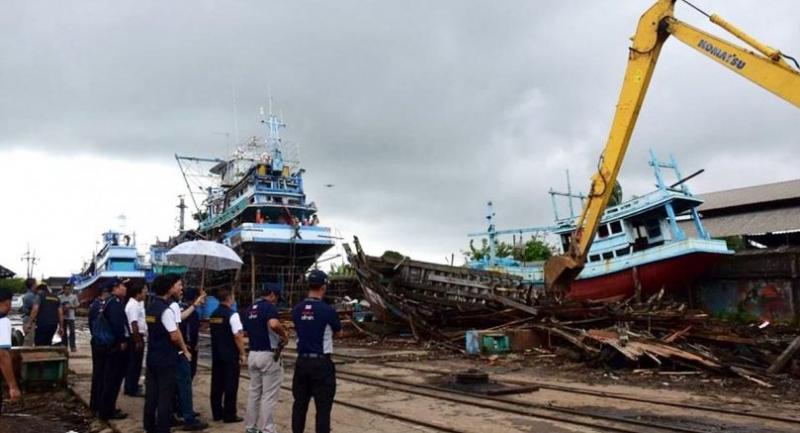 Officials in Ranong province yesterday observe the destruction of one of six dilapidated boats that have had not been claimed by their owners.

THAILAND HAS the will to ratify the C188 – Work in Fishing Convention, Deputy Prime Minister General Prawit Wongsuwon said yesterday. “Thailand has accorded importance to ratification of C188. It’s just that we need to listen to the opinions of all stakeholders, particularly from the fisheries sector,” Prawit said. “We believe that we will receive support from all sectors as our goal is to provide safety to persons working on fishing boats and to eradicate human trafficking.”

Prawit, who is also the defence minister, mentioned the C188 in response to Trent’s suggestion that the ratification of the convention will be a big boost to Thailand’s efforts to fight IUU and human-right abuses.

Fishing operators in Thailand, this year, expressed strong opposition to the ratification because they believe some of the C188 stipulations are too strict to be implemented in Thailand.

The government has taken significant measures to reduce IUU fishing in recent years partly in response to serious warnings from the international community. In 2014, Thailand’s ranking in the Trafficking in Persons report of the United States (US) dropped to Tier 3 – the worst category. In 2015, the European Union (EU) also raised a yellow flag and threatened to bar imports of Thai fishing products. Between 2016 and 2017, Thailand was upgraded to Tier 2 Watch List by the US because of its significant crackdown on human trafficking. This year, Thailand’s ranking improved further to Tier 2.

Still, the yellow flag from the EU remains. Later this month, the EU will conduct an assessment of Thailand’s anti-IUU efforts and the results may influence its decision on whether to remove the yellow flag.

Trent told Prawit that the efforts by Thailand had been evident throughout the past two years. He even expected Thailand to lead the Asean region in anti-IUU efforts when the country takes over the chairmanship of Asean next year.

On Wednesday, Deputy Prime Minister General Chatchai Sarikulya led ambassadors of 20 countries, including those from the EU and the US, to Samut Sakhon province so that they could witness the disposal of nine dilapidated fishing trawlers and the upgrade of Thailand’s fishing-product traceability. “There are about 861 dilapidated boats that must be destroyed to prevent them from being abused,” Chatchai said.

The Marine Department found these boats moored without any owner. Even with notices posted on these boats, no one has claimed ownership of the old vessels. Under laws, the department has the authority to dispose them of.

According to Chatchai, there are now 10,743 registered fishing trawlers. The rest are unregistered and illegal.

The disposal of unclaimed and dilapidated boats has been taking place in several provinces across Thailand.

Yesterday, six such boasts were destroyed in Ranong province.