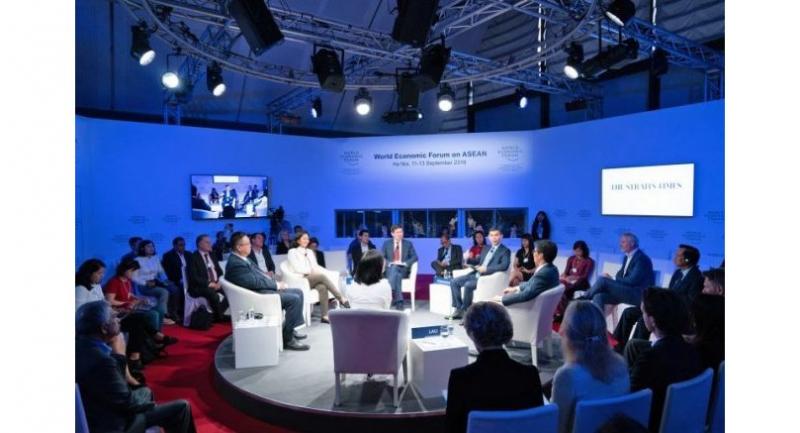 At a session on The Future of Jobs in Asean in Hanoi./PHOTO: WORLD ECONOMIC FORUM

The future of jobs in the region is bright, although the nature of work itself will change, older people will have to be reskilled and others might have to think about more than one career in their lifetime.

These were the views of panellists at a session on The Future of Jobs in Asean held yesterday in Hanoi as part of the three-day World Economic Forum (WEF) on Asean. The session was developed in partnership with The Straits Times.

The theme has been a subject of debate, with concern about the impact of technology on jobs and the advent of the Fourth Industrial Revolution that is projected to have far-reaching consequences across industries and for the way people work.

The discussions saw panellists bringing up interesting trends and proposals. These included Vietnam's acceptance of the idea of people, including government officials, holding two jobs as a way to build resilience, and the growing trend among the young to aim for "Fire" - being financially savvy and able to retire early.

Among the proposals were the creation of a virtual database of knowledge to encourage digital literacy among those aged 60 and above, and introducing education leave across age groups to encourage lifetime learning.

Setting the stage for the discussions, Mr Warren Fernandez, editor-in-chief of Singapore Press Holdings' English/Malay/Tamil Media Group and The Straits Times editor, noted that while the Fourth Industrial Revolution was opening up many more opportunities, it was also leading to angst, anxieties and populist pressures in emerging economies. "The angst over it can be summed up in one word: jobs," he said.

Drawing attention to recent findings from WEF studies, he highlighted that 65 per cent of children entering primary school today will end up doing a job that does not even exist right now.

Another piece of research showed that by 2020, more than a third of core skills needed to do a job will be those that are not even considered crucial today.

Still, there was a high level of optimism in the region, he noted, referring to a poll of 64,000 youth in Asean, released on Tuesday, which showed the majority believe that new technologies will lead to more jobs and higher income.

Vietnam's Deputy Prime Minister Vu Duc Dam, who said he was 99 per cent optimistic about the impact of technology on jobs, brought up his country's emphasis on lifelong learning.

As part of the widespread educational reforms being undertaken in Vietnam, a virtual database of knowledge is being put in place and will be accessible to all, he said.

For the elderly, there will be an ecosystem of knowledge to help them improve their digital skills. For primary school pupils, new textbooks will be introduced next year with an increased focus on science, technology, engineering and mathematics courses. For other students, the effort is aimed at matching the curriculum with that in other countries, he added.

Mr Ian Lee, chief executive for Asia-Pacific of leading workforce solutions provider The Adecco Group, said that it was difficult to predict the type of jobs needed in the future.

"Ten years ago, cyber-security jobs were not heard of. But today, it is one of the hottest jobs," he said.

Ms Vivian Lau, president of JA Asia-Pacific, which prepares young people for employment and entrepreneurship, supports the idea of educational leave to allow people to learn, unlearn and prepare for their future.

Ms Francesca Chia, founder and CEO of Malaysia-based start-up GoGet, which connects businesses to part-timers via its platform, emphasised the need to include the elderly who are willing to undergo training to upskill themselves and take on flexible jobs.

Mr Xu Haoliang, United Nations assistant secretary-general and regional director for Asia and the Pacific at the UN Development Programme, had the last word, as he reminded the audience about the need to care for vulnerable groups.

"We really need to think about what we can do together, in partnerships, so that we leave no one behind," he said.