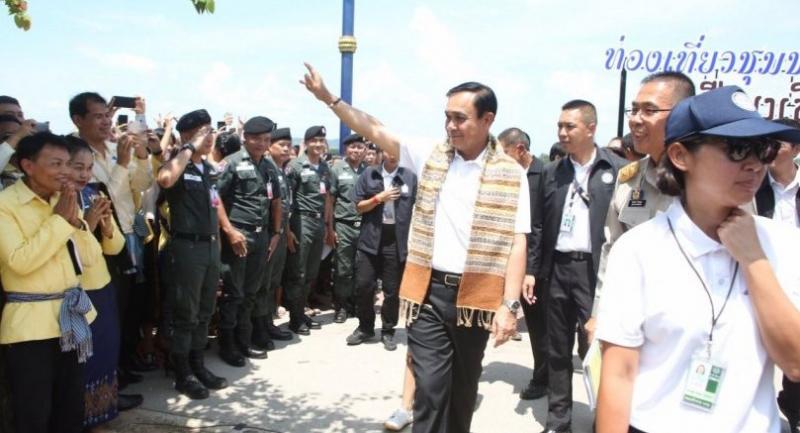 KEY GOVERNMENT figures yesterday asked for cooperation from local community leaders to help maintain peace and order in the run-up to the election.

Prime Minister Prayut Chan-o-cha said village heads and kamnans have to help “prevent any political disorder from happening again”. He added that otherwise the government might be accused of plotting to postpone the election.

Prayut, who also heads the ruling junta National Council for Peace and Order (NCPO), had earlier warned that an election would not take place unless there was peace in the country. That had prompted critics to accuse the junta of making excuses to put off the national vote.

With the law on MP elections being promulgated last week, the general election is now expected to be held sometime between February 24 and May 5. Certain government figures appeared to treat February 24 as the tentative election date.

The PM yesterday called for cooperation from local administrators in helping the government “build democracy” for the country.

“The election is coming soon. Kamnans and village heads must be careful and not allow chaos to happen again, or some people may again say that the government does not want the election to take place,” he said.

“Don’t listen to distorted information. Today, the military, police and authorities are working for you. We are building a castle, a home for us all. We are building democracy and making it strong. Devotion and sacrifice from all of us will strengthen this castle of democracy and prevent it from collapsing,” Prayut said.

He was addressing about 1,500 local residents and officials gathering at Rajabhat Loei University in the northeastern province. The PM and his entourage were on a visit to Loei province yesterday to inspect the progress of development projects.

The PM’s deputy, General Prawit Wongsuwan, who is also the defence minister, also sought cooperation from village heads and kamnans yesterday during his visit to Phetchabun province. Prawit said community leaders should be aware that election campaigning was still not allowed at this time. He reminded them that the law on MP elections would take effect only 90 days after its promulgation last Wednesday.

“The village heads and kamnans who are political canvassers must be careful,” he was quoted as saying by Defence Ministry spokesman Lt-General Kongcheep Tantrawanit.

Prawit was speaking to a gathering of officials from lower northeastern provinces at Phetchabun’s Provincial Hall. He instructed local officials to help maintain peace and order, as well as prevent political violence in the run-up to the election.

“There can be differences in political opinions but there must be no use of violence,” Prawit said, directing his instruction at provincial governors.

He also told district chiefs to call meetings with village heads and kamnans every month to inform them about “what the government has done for the people”, particularly the poor.

Abhisit, a former prime minister, said that the present political bans were in fact restricting the rights of citizens, rather than political parties. He explained that parties honestly seeking innocent support from voters have to keep in touch with electorates.

“The more you limit exchange of views [between parties and the electorate], the more you help political parties that are not looking for innocent support from the people. I want to ask the NCPO what kind of politics they want,” he said, referring to possible vote-buying to woo voter support.

After the junta issued an order to relax political restrictions last week, parties scheduled their general meetings from the latter half of this month until early next month.