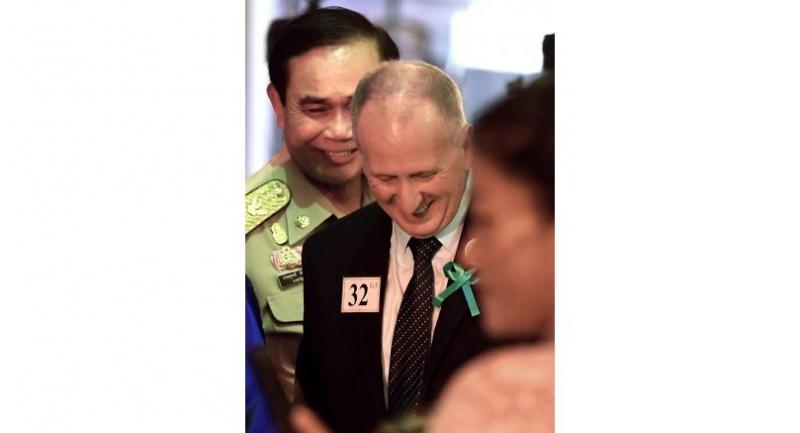 British diver Vernon Unsworth (C) attend a thanksgiving reception with PM Prayut Chan-o-cha (L) in Bangkok on September 6, 2018 for the successful rescue by Thai and foreign volunteers on the 12 boys and their coach out of a flooded cave./AFP

A British caver who helped in the dramatic rescue of 12 boys trapped in Thailand earlier this year sued Tesla founder Elon Musk on Monday for calling him a "pedo guy" and a "child rapist."

The defamation suit filed in Los Angeles by Vernon Unsworth, a Briton involves in several cave rescues, follows a highly public spat between the two after Musk traveled to Thailand and offered to assist in rescue efforts.

The dispute made headlines in July, when Unsworth called Musk's effort to build a mini-submarine for the rescue a "PR stunt" and Musk responded on Twitter by calling Unsworth a "pedo guy," or pedophile.

Musk, a tech entrepreneur who also founded the private space firm SpaceX, apologized days later but not before his comments were widely condemned, raising concerns over his leadership abilities.

But he reignited the dispute in August with an email to BuzzFeed News accusing Unsworth of being a "child rapist," marrying a 12-year-old and engaging in child sex trafficking, the lawsuit alleges.

Musk made the series of false statements "with actual malice, that is, with actual knowledge of falsity or a reckless disregard for truth or falsity," according to the complaint.

Instead of apologizing for his comments, Musk responded with an expletive-laden statement saying, "I hope he... sues me," according to the lawsuit.

Unsworth is seeking unspecified damages "for the worldwide damage he has suffered to his reputation," according to the lawsuit, which noted that a separate complaint was being readied in the High Court of London.

Unsworth, who lives part of the year in Thailand, took part in the gargantuan 18-day effort to retrieve the boys and their coach, a mission that ended on July 10, when the last five members were extracted.

Musk has been the focus of increased scrutiny in recent weeks over erratic behavior including an online interview in which he was smoking marijuana.

Tesla shares have faced pressure amid concerns over Musk's stability as the company seeks to ramp up production of its mass-market electric car.