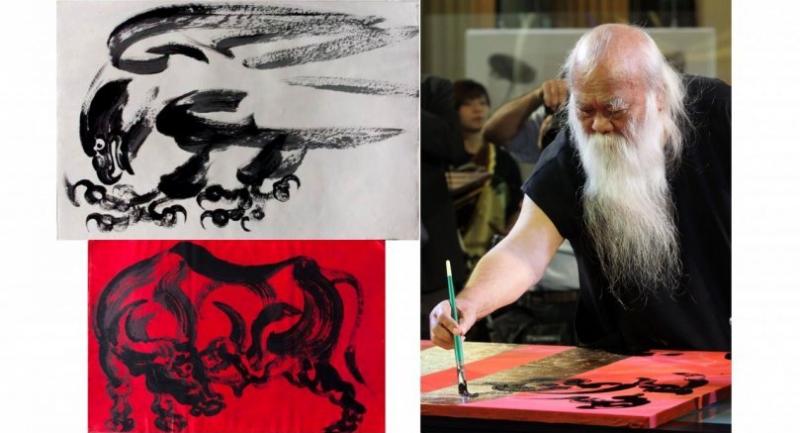 MORE THAN 100 paintings by late national artist Thawan Duchanee, estimated to be worth about Bt300 million, have gone missing from his Bangkok residence, according to the artist’s only son.

Doytibet Duchanee, the artist’s son, said he had found through his own investigation that three paintings worth about Bt6 million had been sold in the black market. Later he found that 113 works were missing. He said he has photographs of each of his father’s paintings. City police chief Pol Lt-General Charnthep Sesawet said yesterday that Doytibet and Achariya Ruengrattanapong, a lawyer of Help Crime Victim Club, had met him a couple of months ago to ask about the latest developments in the case, which was filed in June last year.

Charnthep told reporters that it was still unclear how many paintings had gone missing, adding police were still waiting to for forensic results collected from Doytibet’s home in Bangkok’s Kan Na Yaw district.

The police chief added that a working group, led by his deputy Pol Maj-General Nithinand Petchborom, had been set up to lead the investigation.

Charnthep also said that he could not conclude as of now that the paintings had been stolen, because they had been taken out of the house for sale. He also defended police for its slow response in the case despite the complaint having been lodged in June last year.

He said initially there was confusion about who exactly was the heir of Thawan – his son or the late artist’s partner. The national artist died in September 2017 at the age of 75.

Charnthep said that Thippachat, who lived in Thawan’s Kan Na Yaw residence, had been taking care of the paintings, including the ones reported missing.

He also said that both Thippachat and Doytibet had filed separate petitions in court to become executors of the estate, but the court had named the son as the sole executor.

“I have to admit that some of the paintings are now in the hands of a third party. Some of these people have been invited to provide information,” Charnthep said.

Asked if Doytibet was pointing his finger at a person close to his father, Charnthep only said, without elaborating, that the problem was a result of internal family conflicts.

Meanwhile, Doytibet, plans to hold a press conference on Friday about the missing paintings.

Thawan was one of Thailand’s most esteemed artists – and one of its best-known overseas – and his passing plunged the art world in grief. He is fondly remembered as a man who was as extraordinary in his creativity as he was in his appearance and speech.

Doytibet on Monday wrote on his Facebook page that he had never touched his father’s assets, sold them or even used the money he had left behind.

He said he could not part with the paintings because his father’s blood was running through each and every one of them.

“I am the only lawful heir of my father and the only administrator of my father’s estate. Therefore, my duty is to keep and pass on my father’s paintings so they become the country’s legacy,” he said, adding that he would protect his father’s work until the “last second” of his life.