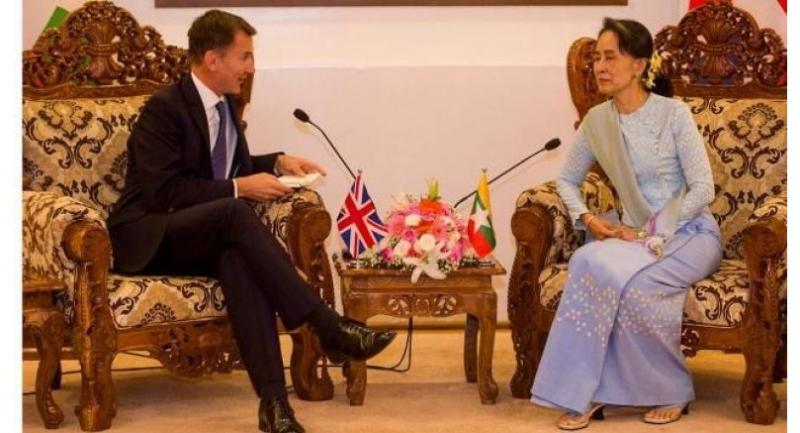 British foreign minister Jeremy Hunt met on Thursday with embattled Myanmar leader Aung San Suu Kyi in the first high-profile state visit to the country since the UN slammed her leadership over the Rohingya crisis.

UN investigators this week released a scathing and meticulous report detailing why several Myanmar generals should be prosecuted for genocide against the Rohingya Muslim minority who were driven out of Rakhine state beginning in August 2017.

The report called for Army chief Min Aung Hlaing and five other top military leaders to be investigated for genocide, war crimes and crimes against humanity for their role in the crackdown.

Under their leadership the Myanmar military face allegations of extrajudicial killings, sexual violence and that wholesale razing of Rohingya villages in Rakhine -- the epicentre of the crisis from which more than 700,000 Rohingya fled.

Hunt, who arrived in Yangon on Wednesday, had said he wanted to see "first-hand" the humanitarian crisis faced by the Rohingya.

On Thursday, the foreign minister was taken on an army-chaperoned tour of Rakhine via helicopter.

He arrived in Myanmar's capital Naypyidaw in the afternoon to have a one-on-one chat with Suu Kyi. They sat together for 15 minutes to speak privately, before their respective delegations joined them.

Hunt said the day before that he planned to bring up the Rohingya humanitarian crisis to the civilian leader, a former pro-democracy icon who has seen a sharp fall from grace internationally due to her failure to address the crisis unfolding in Rakhine.

Suu Kyi is in a power-sharing agreement with the army, which controls a quarter of parliament's seats and three ministries.

While UN investigators did not call for her to face prosecution for the atrocities committed against the Rohingya, they condemned her government for "acts and omissions" that "contributed to the commission of atrocity crimes".

Hunt will head to New York next week for the UN General Assembly.

Myanmar and its handling of the crisis is on the agenda for a foreign ministers meeting at the UN on Monday.

Suu Kyi will not be in attendance.