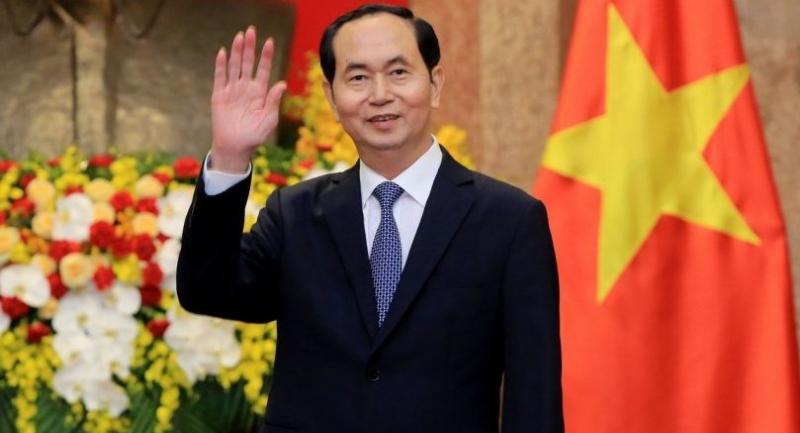 Vietnamese President Tran Dai Quang died on Friday at the age of 61 after a serious illness, state media reported.

His death is not likely to dramatically alter politics in a country where the communist state oversees almost every facet of society -- although the death of a sitting leader is rare.

Coverage on state media was sombre Friday, with a Vietnam Television anchor dressed in all black as she announced the news of the leader's death, first reported by the official news agency.

He passed away from a "serious illness despite devoted treatment by professors and doctors", the official Vietnam News Agency said.

A member of Quang's staff confirmed his "very sad" death to AFP.

In office as president since April 2016 after more than four decades at the powerful Ministry of Public Security (MPS) -- including five years as minister until 2016 -- Quang had a reputation as a hardliner and dedicated communist party member.

Though he held one of the country's top four positions and was officially the head of state, his role as president was seen as largely ceremonial, greeting visiting leaders and hosting diplomatic events in a bid to boost Vietnam's profile on the world stage.

Quang, also a politburo member, had appeared thin and pale in public in recent months, and was unstable on his feet last week when he hosted a welcoming ceremony for Indonesian President Joko Widodo in Hanoi.

His last public appearance was just two days ago at a meeting with visiting Chinese politicians and foreign dignitaries in Hanoi.

State media celebrated Quang for his devotion to public service and commitment to the party, which he joined in 1980.

Born October 12, 1956 in northern Ninh Binh province, Quang joined the police academy as a young man and went on to study at the College of Foreign Language in the capital.

His long career in the security ministry -- then known as the Interior Ministry -- started in 1975 and Quang spent much of his tenure climbing the ranks of the shadowy yet powerful institution, which heads up the country's secret police and intelligence.

As head of MPS, Quang had a reputation as tough and influential in the inner circles of the communist party, though he often appeared uncomfortable in the public eye and lacked the charisma of some of his peers in the party's upper echelons.

In an interview with AFP in 2016 ahead of a visit by the former French leader Francois Hollande, Quang read from a prepared statement and was quickly escorted from the room by staff when questions went off-script.

His time in office was dominated by a simmering conflict with Beijing over the South China Sea, a long-running dispute between the communist neighbours that escalated on several occasions.

Vietnam cancelled at least one oil drilling project in the resource-rich region during Quang's tenure in an apparent bid to quell tensions.

He was the administration's most public face at a series of high-profile events, most notably at an APEC meeting in Danang in November last year where he hosted a bevy of world leaders -- including US President Donald Trump and China's Xi Jinping.

As president, he oversaw a crackdown on dissidents that rights groups have decried as a chokehold on free expression. Some 100 political prisoners were behind bars as of April with more than 40 jailed this year alone, according to Amnesty International.

It is a bruised reputation that is likely to resonate among critics outside Vietnam, even as his legacy will be celebrated -- albeit tightly controlled -- at home.

"He was basically at the top of the apparatus of repression that silences voices for human rights defenders, government critics, bloggers and members of civil society," Andrea Giorgetta of the International Federation for Human Rights told AFP after his death Friday.

He is survived by his wife and two sons.

There was no immediate announcement about when his funeral will take place, though the government is certain to host a state service for him.