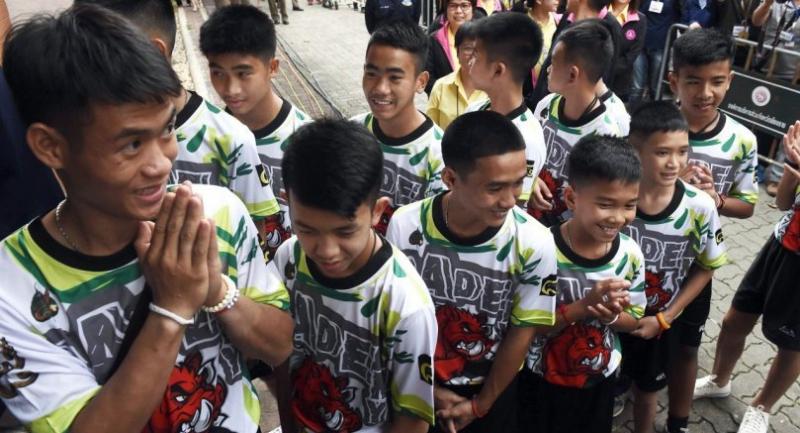 File photo: Twelves boys and their football coach Ekkapol Chantawong (L), dramatically rescued from deep inside a Thai cave after being trapped for more than a fortnight, arrive for a press conference on July 18, 2018. // AFP PHOTO

The Mu Pa Football Club has been invited by the International Olympic Committee (IOC) president Thomas Bach to take part in the Youth Olympic Games in Buenos Aires, Argentina between October 6-18.

IOC member Patama Leeswadtrakul said the IOC would pay for all expenses including air tickets, accommodation and food for the Mu Pa players and their parents and the working team from the government to visit Argentina.

The Mu Pa (Wild Boars) riveted world attention in June when they were trapped for almost two weeks inside a cave in Chiang Rai province. They escaped alive through an international rescue effort, though a former Navy SEAL died in the extraction effort.

The team would also play a friendly game of either football or futsal with a Youth Olympic team in Argentina.

“The IOC passed on the invitation through me,” explained Patama, who is also the Thailand president of the Badminton Association.

“All 13 Mu Pa Academy players, their parents and entourage will be invited to share the experience with young athletes from all over the world by staying at the Athlete Village which is reserved only for athletes and officials,” said Patama.

The IOC member also insisted that media would not be allowed to reach the Mu Pa players.

The team will also be taken to observe various competitions, said Patama, who is currently on a trip to the US .

Like the Summer Olympics, the Youth Olympics are organised every four years, but for athletes age 14-18 only.