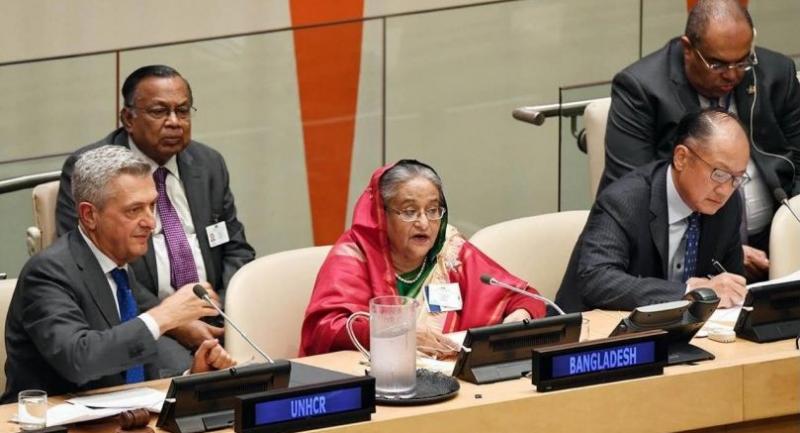 Prime Minister Sheikh Hasina addresses a meeting titled “High-level Event on the Global Compact on Refugees: A Model for Greater Solidarity and Cooperation” at the UN headquarters in New York yesterday. Photo: PID

Bangladesh's Prime Minister Sheikh Hasina yesterday made three recommendations for solving the Rohingya crisis at its root, including abolition of discriminatory laws, policies and practices of Myanmar against the minority group.

According to her second recommendation, Myanmar must create conducive environment by building trust and guaranteeing protection, rights and pathway to citizenship for all Rohingyas. If needed, it should create a "safe zone" inside the country to protect all civilians.

Her third recommendation says atrocious crimes against Rohingyas in Myanmar should be prevented by bringing accountability and justice, particularly in the light of recommendations of the Fact-Finding Mission of the UN Human Rights Council.

The PM was speaking at a high-level event on the "Global Compact on Refugees: A Model for Greater Solidarity and Cooperation" at the UN headquarters in New York.

"In Bangladesh, now we're faced with the largest forced movement of over 1.1 million traumatised Rohingyas in the shortest time. They've been forcibly displaced from their homes in Rakhine State of Myanmar where they had been living for centuries.

"While we're providing them with basic necessities, the magnitude of the problem has posed serious challenges for us. We've allocated over 6,000 acres of land," the PM told her audience.

The diversion of human and other resources for Rohingyas has taken a toll on the environment, economy and society, she said.

Hasina mentioned that the international partners, especially the UN agencies, have been helping the Rohingyas.

"Regrettably, the current UN joint response plan of 2018 which requires $950 million has remained severely underfunded with only 33 percent funding secured. Humanitarian and development support of the international community for the Rohingyas and other affected communities must be predictable and in the spirit of international responsibility sharing."

Hasina reiterated that the Rohingya crisis has originated in Myanmar and the solution has to be found there.

"As a responsible government, we've opened our border and provided shelter to the forcibly displaced Rohingyas. By doing so, we've not only saved lives, but also stabilised the entire region by containing the crisis within our border."

She said Bangladesh would like to see the Rohingyas returning to their homes with safety, security and dignity. "Pending their return, we are trying to address their basic needs."

Given the scarcity of land and other socio-cultural and environmental impacts, Hasina said the Bangladesh government was going to relocate Rohingyas to a newly developed island, Bhashan Char, where they would have better living conditions and livelihood opportunities.

The PM said in the absence of any policy of local integration in Bangladesh, Rohingyas need to secure their future in their own country, Myanmar. She urged the international community to help Bangladesh achieve that.

Hasina said the "Global Compact on Refugees" has been adopted at a time when the world is faced with swelling refugee crisis. Innocent people from various conflict-torn countries were leaving their homes for safety and security while many countries like Bangladesh were giving them shelter, protection and hope.

She mentioned that most of these refugee-hosting countries were developing countries having own set of challenges. "Yet, they respond to the call of humanity."

The world must recognise their contributions and help those countries shoulder the burden. The world leaders must come forward with political will and commitment, she added.

The PM said the world must not forget that every refugee desires to return to his homeland.

"Safe and sustainable return to the country of origin is particularly important to resolve protracted refugee crisis. Greater attention needs to be paid to remove the root causes that make people refugee, and those root causes lie in the countries of origin."

She said the realisation of the "Global Compact on Refugees" should exhibit stronger commitment towards addressing those root causes rather than focusing on response to an emerging situation only.

The event was moderated by UN High Commissioner for Refugees Filippo Grandi.

Many refugees came with horrific accounts of killings, sexual violence and arson. UN investigators say the evidence warrants the charges of genocide, crimes against humanity and war crimes.

In September 2016, the United Nations General Assembly unanimously adopted the New York Declaration for Refugees and Migrants with a clear imperative: to forge comprehensive and predictable responses to large-scale movements of refugees, while easing pressure on host countries.

The declaration called upon the UNHCR to move forward in two ways.

First, they requested that UNHCR develop and initiate the comprehensive refugee response framework (CRRF), contained in annex I of the declaration, in close cooperation with relevant actors.

Second, they agreed to work towards the adoption of a global compact on refugees in 2018, based on the practical application of the CRRF and consultations with all relevant stakeholders in the intervening two years, reads the concept note of the UN event.

It also said that in the face of new and ongoing conflicts, and consequent increasing and prolonged forced displacement, comprehensive responses remain critical.

Over 85 percent of all refugees are located in low and middle income countries. Humanitarian budgets are stretched, addressing often less than 50 percent of urgent needs.

As recognised in the declaration, new approaches and broader sources of support are needed as ever before that are sustainable over time and that strengthen resilience of refugees and also of the communities where they reside. The consultations on the global compact have underscored the importance of this.