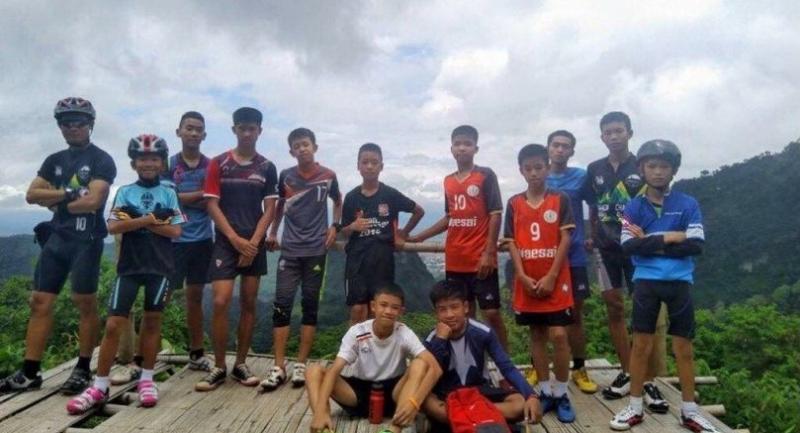 The 12 Mu Pa footballers and their coach.

THE GOVERNMENT has not granted intellectual rights of the rescue of the Mu Pa (Wild Boar) football team and their coach to any filmmakers despite several reports saying that Universal Pictures has secured deals with the Australian divers and the football team, Lt-General Weerachon Sukondhapati-pak said yesterday.

Weerachon is spokesperson of the committee tasked with handling intellectual rights for the epic Tham Luang cave rescue.

The panel, set up in July, is comprised of officials from the culture, tourism, foreign and human development ministries and also includes reputable names from the Thai film industry.

Apart from handling the rights of the much-heralded rescue in Chiang Rai’s Mae Sai district, the panel is also tasked with screening information, and safeguarding the children’s privacy and the country’s image. It will also oversee the production of the film should the rights be sold.

Deadline news reported that the film would be produced by Dana Brunetti and Micheal De Luca, who have big hits like the “Fifty Shades of Grey” series, “Captain Phillips” and “The Social Network” under their belts.

However, the panel has insisted that it did not give any studio the rights to produce a film on the children’s ordeal, and quoted the coach as saying that he too has not accepted any such deals.

“But we are not sure if Universal Pictures bought the rights from the Australian divers,” Weerachon said.

The parents of one of the Wild Boar team members confirmed that nobody had contacted them to sign a film deal, adding that they entrusted the committee to take care of their rights.

Somsak Tanakham, the Mae Sai district chief, also said Universal Pictures had not contacted him or anybody in his office.

Meanwhile, Bundit Thongdee, president of Thai Film Directors Association, said under the law, Universal Pictures does not have to acquire the rights if the names are changed in the film.

“The studio will only have to acquire rights and permission if it wants to use their real names in the film,” he said. Bundit added that the studio did not have to comply with any Thai regulations if it shoots the film outside the Kingdom.

However, Bundit was positive that a film on the cave rescue would be an inspiring one about solidarity, love and peace, “like how powerful we were when the world was united as one”, he said.

The cave rescue saga, which began on June 23, gripped people across the world as efforts to locate the Wild Boar team and their coach kept getting hampered by rising water levels and strong currents.

The Thai Navy Seals, who were joined by many international professional divers, including Australians Challen and Harris, coordinated the complicated operation to find and extract the football team.

One former Navy Seal, Lt-Commander Samarn Gunan even lost his life in the operation. The Wild Boar team and the coach were safely extracted by July 10.