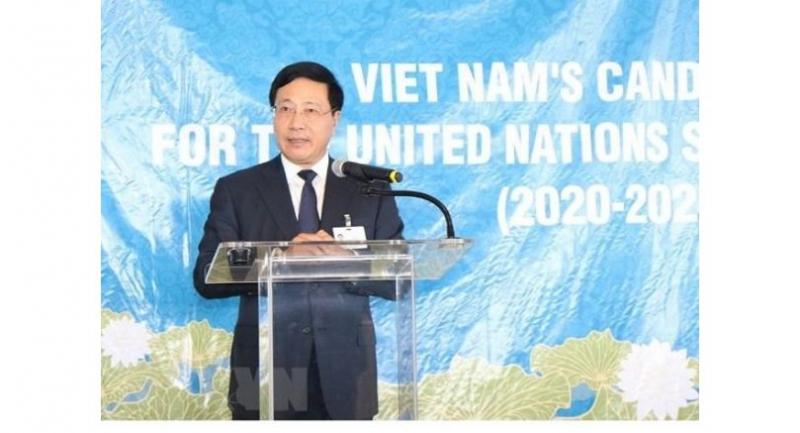 Deputy Prime Minister and Foreign Minister Phạm Bình Minh speaks during a programme in New York on Wednesday on the sidelines of the 73rd session of the UN General Assembly. — VNA/VNS Photo Hoài Thanh

Vietnam Deputy Prime Minister and Foreign Minister Pham Bình Minh, in New York for the United Nations General Assembly, sought support on Wednesday for Vietnam to be a non-permanent member of the Security Council in 2020-21.

Addressing more than 100 leaders, ministers and representatives of embassies and UN member countries, Minh said Vietnam’s bid for the position reflected its policy of peace, independence and self-reliance and its wish to contribute more to international efforts on peace, security and sustainable development.

His appeal was well received at the meeting on the side lines of the General Assembly.

He proposed that EU partners support Vietnam’s candidacy and accelerate the signing of a free-trade agreement.

Foreign officials hailed the contributions Vietnam had made to joint efforts in the region and the world and vowed to consider its proposal and continue to coordinate with it to maintain international peace and security.

Minh and Australian Foreign Minister Marise Payne agreed to continue the exchange of delegations, especially at the high level, as well as the sharing of measures to boost economic and trade partnerships between their countries.

Minh asked Ugandan Minister of State for Foreign Affairs Henry Oryem Okello to support Vietnamese firms selling their products there and seek investment opportunities, including in activities of the telecommunication firm Viettel.

Minh told US Deputy Secretary of State John Sullivan that Vietnam valued its relationship with America and hoped to continue promoting bilateral ties in economy, trade, education training, and science and technology.

He proposed that the US continue supporting Vietnam regarding war remnants, including the implementation of a dioxin detoxification project at Bien Hoa Airport.

Phuc was to deliver a speech during the session and attend a seminar with US businesses on investing in Vietnam amid the Fourth Industrial Revolution.

He will meet with leaders of the UN General Assembly and the secretary general of the UN, with the president of the Council of State of Cuba, the presidents of Fiji and Croatia, and the prime ministers of Saint Lucia and Bulgaria.