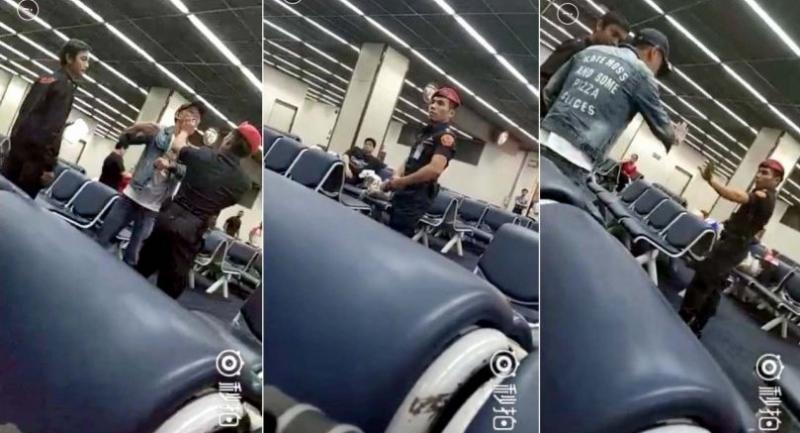 By THE NATION,
AGENCE FRANCE-PRESSE

“The prime minister has expressed regret over the incident and is concerned about Chinese sentiment,” Sansern said.

China is Thailand’s biggest source of tourists, making up about a quarter of its 35 million visitors last year.

The number of Chinese tourists dropped sharply after a boat accident in Phuket, which claimed nearly 50 lives in July.

“The assault incident could impact the country’s image,” the spokesman added.

The footage showed the guard engaged in a quarrel with a Chinese man and raising his hand towards the face of the tourist, before taking a wild swing in an attempt to punch him.

The Chinese man tried to evade the punch before another airport security guard tried to calm the situation.

The incensed Chinese man can be seen shouting and pointing at the guards in the video.

“The PM thought that although the tourist could not produce documents to confirm his accommodation in Thailand, refused to go to a detention room, and acted inappropriately with officials, still the guard should have controlled his emotion and treated him in keeping with international practices,” Sansern said.

Airports of Thailand announced on Saturday that it had suspended Wing Commander Suthirawat Suwanwat, director of Don Mueang airport as well as the director for security for 30 days, pending an investigation into the incident.

The security guard at the centre of the action has also been suspended from active duty and could be dismissed after the investigation because his action is deemed a severe disciplinary offence, it said.

Suthirawat said on Saturday that the authority could not deny responsibility for the shortcoming and he agreed to compensate the victim and would make a written apology to him through the Chinese Embassy.

The tourist was identified as Mei Ji who had arrived via a flight from Jakarta, the airport authority said. It added that the Chinese man had been refused entry into Thailand, as he could not show proof of onward travel, accommodation or that he had sufficient funds to support his stay in Thailand.

He also refused to wait inside a room. The man later left the country but his encounter was filmed on mobile phones and uploaded online.

The Ministry of Tourism and Sports has estimated that it would lose more than half a million Chinese tourists angered and scared after the boat tragedy.

In August, some 860,000 of the 3.2 million tourists who visited Thailand were Chinese, according to government statistics.

The numbers represent a nearly 12-per-cent decline in Chinese visits from the same period last year.