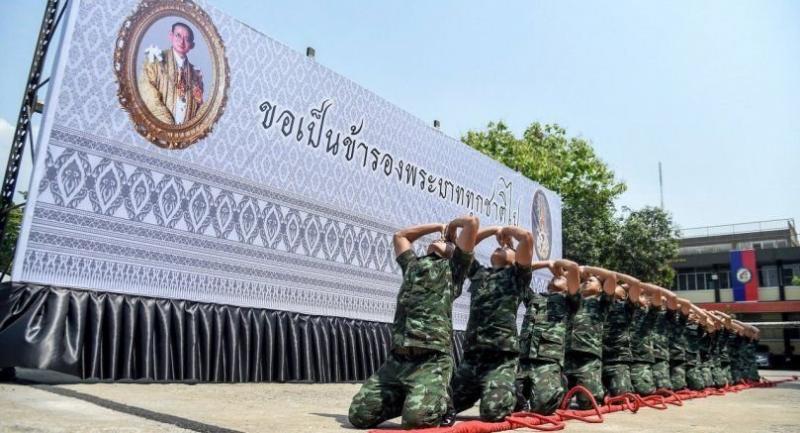 THE COUNTRY saw the most aggressive enforcement of the lese majeste law after the junta came to power in 2014, but current trends point to an unprecedented relaxation, according to iLaw.

“There was a time, after the coup in 2014, when dozens of people were summoned and charged, with military officers present in the process. And then there was this peak after the passing of King Rama IX,” said iLaw’s documentation centre head, Anon Chawalawan. “But, all of a sudden, since last year, the tension built after the coup has started to ease. We see a number of cases getting dropped and we see a significant change in the prosecution procedure.” iLaw, a non-profit organisation that champions democracy and freedom of expression, has been keeping a record of lese majeste cases related to politics since the day the military seized the reins of power more than four years ago.

Scores of people were slapped with various criminal charges – from violation of junta orders to sedition. But above all, the draconian lese majeste law – Article 112 of the Criminal Code that prohibits defamation, insult and threats against the monarchy – was one of the allegations commonly used against dissenters and political activists. In the early days, Anon said, the act of bringing alleged violators to justice was more a matter of “clearance”.

Cases on the books since 2006 that had seen no movement were dusted off. Alleged violators were summoned by junta order to undergo “attitude adjustment” and interrogation. Some were prosecuted soon after their seven-day detention.

The situation was especially worse after October 2016, when King Bhumibol passed away. Royalists reported an unusually large number of lese majeste cases besides using other measures, including violence, to deal with those deemed disrespectful of the monarchy while the nation mourned.

The case of Jatupat Boonpipattararaksa, also known as Pai Dao Din, occurred during this period. He shared an article on Facebook deemed against the law. After pleading guilty last year, Pai was sentenced to two years and six months in jail.

During the period of mourning between 2016 and 2017, at least 33 people were charged with lese majeste, according to iLaw.

However, since the beginning of this year, Anon said, there had been a change for the better.

“So far nobody has been charged with lese majeste. And there’s also this unprecedented development, a new norm where lese majeste allegations have been dropped,” Anon said.

The expert cited the case of Thanat Thanawatcharanont, aka Tom Dundee. Thanat pleaded guilty to both allegations he was facing under Article 112 and yet he was acquitted. In earlier days, Anon said, it was highly likely that the court would have ruled him guilty.

Anon also cited the case of rights lawyer Prawet Prapanukul, who had been charged with lese majeste and sedition but was also recently acquitted. The court explained why he was guilty of sedition, but said nothing about the lese majeste accusation.

Another recent development, which points to a trend of relaxation in the use of Article 112, is the case in which the Appeals Court acquitted six young men of lese majeste and only punished them for criminal association and damaging public property.

“This shows that the interpretation is now more strictly and more in line with the spirit of the law,” Anon said. “In this case, it was vandalism and it was not necessarily an insult to the monarchy. This is a new development. Before, the interpretation could sometimes be very broad.”

Most importantly, Anon said, the new trend could also be seen in the recent change in procedure.

“The Office of the Attorney-General announced in February that royal defamation indictments can come only from top national prosecutors, to prevent misuse of the law,” he said. “From this, we can expect to see better scrutiny in interpretation of the case before it goes to court.”