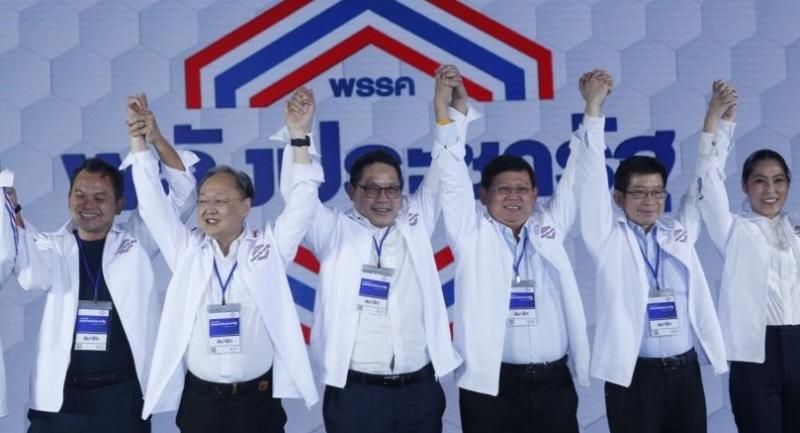 Ministers at the opening of Palang Pracharat Party on September 29

GOVERNMENT figures yesterday shrugged off growing calls for four Cabinet members to resign after having joined a new political party that is regarded as pro-junta.

Politicians said it was unfair for the ministers to remain in power, pointing to a potential conflict of interest in the run-up to the next general election.

Deputy Prime Minister Somkid Jatusripitak yesterday said he did not think the four Cabinet members would have an advantage over other political competitors while remaining in power. He added that the government was being “scrutinised in many ways”.

Somkid, who heads the government’s economic team, said the law does not prohibit ministers who become politicians from retaining their positions. “Like in the past, caretaker ministers could still run the country in the run-up to elections,” he said. He added that the four ministers, who are members of his economic team, are well qualified for their jobs and determined to serve the country.

“They instead deserve support to enter politics,” Somkid said, adding that Thai politics lacks young people like them who are determined to serve the country. “The four will resign at the right time. The election has not been scheduled yet,” he said.

The four ministers are key figures in the Palang Pracharat Party, which plans to nominate General Prayut Chan-o-cha as its prime ministerial candidate in the next general election.

At its first general assembly last Saturday, the party selected Uttama as its leader, Sontirat as secretary-general, Suvit as deputy leader, and Kobsak as the spokesman and executive of the party.

In response to calls for him and the three others to step down, Sontirat yesterday said it was his duty to help the government achieve its various targets and projects during its remaining time in office. However, he added: “The four of us are happy to listen to suggestions, criticisms and comments from the public with regards to our decision to remain in our current posts.”

He also assured that during the period until the election and also after the election, “we will work to improve the country and perform at a higher standard than ever before”.

He said Palang Pacharat still needed to get approval from the Election Commission to become a political party officially. “We have not yet started any formal political procedures as a party,” he added.

Democrat Party leader Abhisit Vejjajiva yesterday said it was against the spirit of the Constitution and political etiquette for Cabinet members in a post-coup government to remain in power while joining a political party.

He noted that according to the charter, members of the junta’s organs who wanted to enter politics by contesting the next election were required to resign from their positions within 90 days of the new Constitution taking effect, which was in April last year.

“Those who did not quit at that time are supposed to not be stakeholders in the upcoming election,” he said.

Abhisit also said that in the run-up to elections, it is a practice for ruling politicians to have their powers restricted regarding such matters as bureaucratic transfers and budget allocation, to prevent them from gaining an advantage over other competitors.

He said the Constitution exempts the current government from such practices on the assumption that those opting not to leave after the charter became effective would not be involved with the election. “The rules are not for [members of the junta’s organs] to become political players themselves,” the Democrat leader said, adding that those people are supposed to be “referees” for the contesting parties.

Abhisit said the Cabinet members involved with Palang Pracharat seem to be finding legal loopholes and ignoring the spirit of the Constitution.

“Can they dare to deny that they are not using their status for political advantage?” Abhisit asked.