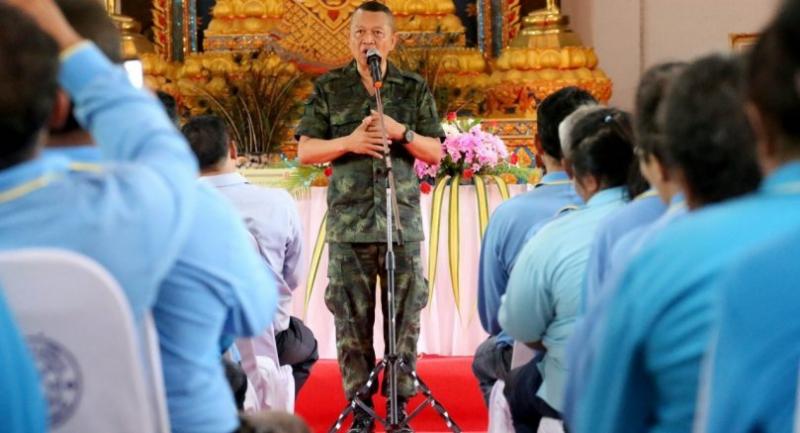 Pornsak yesterday met with 500 Buddhist residents at a temple in Yala’s Muang district to gather input and recommendations on tackling the unrest and other issues.

Napasorn Sirimangkalo, the representative of the Buddhist group “Tai Rom Puttatham Yala”, said the residents hoped Pornsak would help restore peace to the region so that people could make a living in harmony. Little is known about the new chief’s policy direction due to lack of information. Pointing to existing double standards in the treatment of people and even in providing aid, she urged measures to ensure equality among people of different religions to prevent the conflict from escalating.

She also urged Pornsak to help curb corruption in certain state offices and implement job promotions that prioritised locals in order to boost their morale. She said the violent attacks had lessened, hence the authorities should focus more on development and “take care of people’s hearts and minds” and not just give money. While making a courtesy call on Sunday on the Sheikhul lslam of Thailand, Aziz Phitakkumpon, Pornsak had vowed to launch proactive measures to significantly clean up drug issues.

He cited a recent survey that found that most residents in the deep South saw the drug problem as the most pressing issue, not the separatist insurgency which reignited in 2004 and has since claimed almost 7,000 lives.

Among the measures to crack down on drugs was the Army Region’s coordination with the Office of the Narcotics Control Board (ONCB) and related agencies to soon raid 7,000 target locations – 5,000 spots to be raided by the Army and 2,000 spots by police. The raids would be transparent and respect the human rights of the suspects and be done as necessary, he assured.

Pornsak said the ONCB would also get public participation, with kamnans and village headmen taking key roles in curbing drug addiction in communities. The Army would serve as a support force. As people believed drug use persisted because of state officials’ involvement, Pornsak said officials, especially military men who were found guilty of selling illicit drugs would face disciplinary action and punishment under the criminal code.

Pornsak said he would continue the ongoing projects or operations that were good, including the government’s talks with separatists, as it was the government policy. Security officers’ patrol plan would be adjusted, as truck or motorcycle patrols on the same routes made officers vulnerable to attacks. “The military must not be lazy, just going on trucks and heading back to a base... They must focus more on foot patrol and stay overnight nearby to help protect villagers in the area... If the soldiers stay close by, no insurgent would dare to be in the area.”

“When we provide funds and tools for operations, if an attack occurs, those responsible for providing security in a two-kilometre-radius from the attack scene must be held accountable,” he added.