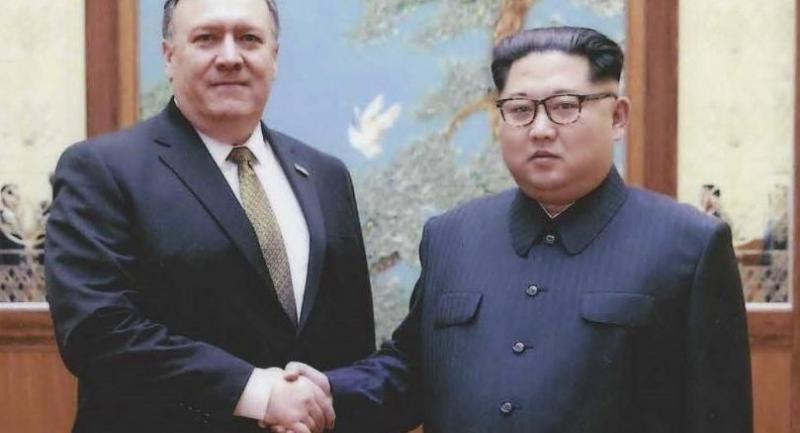 In this photo released by the US Government on April 26, 2018, North Korean leader Kim Jong-Un (R) shakes hands with US Secretary of State Mike Pompeo in Pyongyang over the 2018 Easter weekend./AFP

US Secretary of State Mike Pompeo will travel to North Korea next week to meet with its leader, Kim Jong-un, the State Department said Tuesday.

Pompeo will visit Pyongyang Sunday as the US pushes to dismantle the regime's nuclear weapons program and set up a second summit between President Donald Trump and Kim.

At their first summit in Singapore in June, Kim agreed to work toward "complete" denuclearization of the Korean Peninsula in exchange for security guarantees from the US.

Negotiations between the two sides have since stalled as the US demands concrete steps toward denuclearization and the North insists on first declaring an end to the 1950-53 Korean War.

The three-year conflict ended with an armistice, not a peace treaty, leaving the sides technically at war.

Pompeo will be making his fourth trip to Pyongyang after an earlier visit in August was called off by Trump over what he called a lack of progress in denuclearization.

"These conversations are going in the right direction and we feel confident enough to hop on a plane to head there and continue the conversations," department spokeswoman Heather Nauert told a regular news briefing. "Our policy has not changed. Things stand firmly in place, such as the sanctions ... remain in place."

Pompeo met with his North Korean counterpart, Ri Yong-ho, on the sidelines of the United Nations General Assembly in New York last week. The State Department announced afterward that the secretary had accepted Kim's invitation to visit Pyongyang.

Days later, in an address to the UN General Assembly, Ri slammed the US for continuing to pressure the regime with sanctions and declared there was "no way" the North would give up its nuclear program before seeing trust-building steps from the US.

Nauert said Pompeo will also visit Seoul Sunday and Monday to meet with South Korean President Moon Jae-in and Foreign Minister Kang Kyung-wha. On Monday, he will travel to Beijing, where he is to meet with his Chinese counterparts.

Prior to visiting Pyongyang, Pompeo will stop in Japan Saturday and Sunday for talks with Prime Minister Shinzo Abe and Foreign Minister Taro Kono.

"Secretary of State Pompeo's visit to North Korea to meet with Chairman Kim Jong-un presents an excellent opportunity to not only ensure Washington and Pyongyang have a clear understanding of each other's goals when it comes to denuclearization but, and of much more importance, what the agenda and deliverables would be for a much bigger meeting: a summit between President Donald Trump and Chairman Kim," said Harry Kazianis, a North Korea expert at the Center for the National Interest.

"While surely Pompeo and Kim won't be able to create the complete agenda for a second summit -- or achieve a massive breakthrough in one meeting -- their talks can explore if such a meeting is viable and what both sides might be willing to compromise on."

Trump said last week that a second meeting would happen "in the not too distant future" and that a date and venue would be announced soon. Singapore was not among the possible locations, he said.

Citing his exchange of fiery rhetoric with Kim last year, Trump also said the two were being "tough" over the North's testing of nuclear weapons and ballistic missiles capable of reaching the US.

"And then we fell in love," he said at a rally in West Virginia Saturday. "No really. He wrote me beautiful letters."

Kim has expressed a desire to denuclearize before the end of Trump's term in early 2021. Trump himself has said he is in no rush.

"We're hopeful. We're working toward that goal," Nauert said of the 2021 timeline. "Everyone recognizes that we have a way to go, ways to go, and a lot of work that is left to be done."

Kazianis said Sunday's meeting between Pompeo and Kim could be a "make or break event" for US-North Korea relations, "especially if it were to go badly."