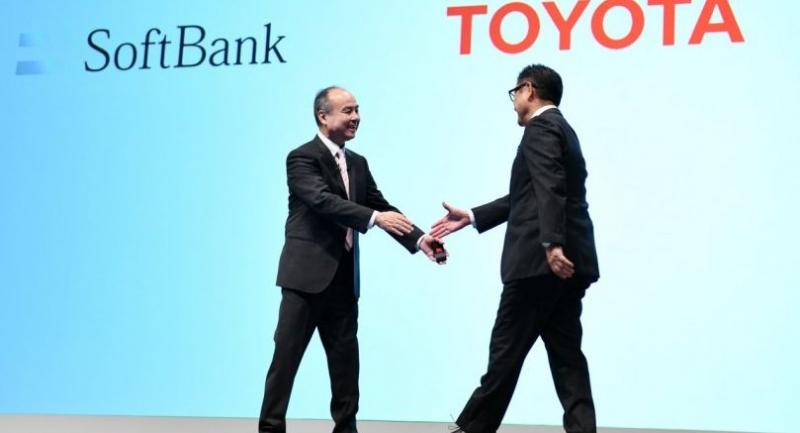 Japanese car giant Toyota and conglomerate Softbank on Thursday announced they would create a joint venture to provide "new mobility services" including autonomous vehicles for services such as meal deliveries.

The new company will be called "Monet" -- short for "mobility network" -- and will be 50.25 percent owned by Softbank, with the remainder held by Toyota.

Monet would be created by April 2019 and would have an initial capital injection of 2.0 billion yen ($17.5 million), rising eventually to 10 billion yen, said the new firm's CEO Junichi Miyakawa.

By the second half of the next decade, the new firm would be rolling out autonomous services using Toyota's battery electric vehicles.

"Possibilities include demand-focused just-in-time mobility services, such as meal delivery vehicles where food is prepared on the move, hospital shuttles where onboard medical examinations can be performed, mobile offices," said the two firms in a statement.

Toyota's president Akio Toyoda has pledged to transform the auto behemoth "from a car manufacturer to a mobility company" to face what he described as a "once-in-a-century challenge" to an industry undergoing "profound change".

Under tycoon CEO Masayoshi Son, SoftBank, which started as a software firm, has increasingly been seen as an investment firm, ploughing funds into a broad range of companies and projects outside its core business.

In recent years it has completed deals with the likes of French robotics firm Aldebaran and Chinese e-commerce giant Alibaba.

"Softbank alone and Toyota alone cannot do everything so we should maybe team up," said Miyakawa.

He acknowledged that rivals in the United States, China and Europe were "further down the road" but stressed: "We're not giving up. We believe we can catch up."