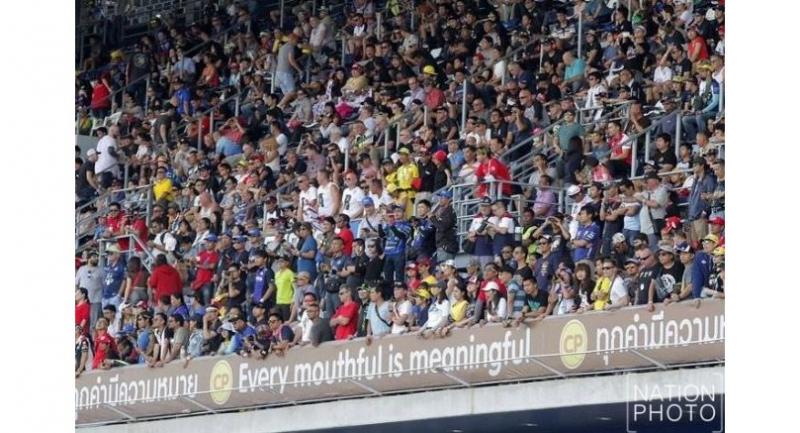 MotoGP fans support riders during the Qualifying round of the PTT Thailand Grand Prix at the Chang International Circuit in Buri Rum.

They came by train, bus and car but Thai fans are bonding over a shared love of MotoGP champ Marc Marquez, as the first-ever race is held here to an enthusiasm that organisers hope will catch fire across Southeast Asia.

Sporting a hat emblazoned with Marquez's number 93, Pornrathee Pinchanpalee waited outside the exit of the Chang International Circuit late Friday to catch a glimpse of her favourite rider, even though she managed to take a photo with him earlier.

She was in a group of several other Marquez-mad Thai fans waiting for the 25-year-old star after the first practice sessions ahead of Sunday's race.

"We came separately. I'm alone, but we met here," said the 38-year-old, who lives about an hour and half away from Buriram, a rural town of 30,000 hosting Thailand's maiden MotoGP.

"We are in a fan club of Marc's. Marc is so nice, he is so kind. He always has positive thinking. I love it," she said.

"I mean he's the champion, and he's handsome also."

The group came from different backgrounds, but the fever for Marquez was the same.

"Give us seven!" chanted a friend of Pornrathee, putting up a hand sign with the number of premier titles Marquez has won across divisions.

Tickets to the Marquez stand, which cost about $75, were slightly more expensive than normal prices. But Pornrathee said she secured hers earlier this year.

"So when I knew MotoGP was coming here I was so excited and we had a plan to go here," she said.

Thailand is the 15th leg of the 19-race season.

Marquez enjoys a comfortable 72-point lead over the second-place rider going into Buriram and a strong performance would push him closer to his fifth MotoGP title.

His local supporters think he will triumph on Sunday, following his victory in Spain last month.

"He will absolutely win as he is quite confident," Aekkachai Chewong, 26, a Thai motorbike enthusiast.

Marquez also lit up social media in a pre-race event in Bangkok on October 3, when he rode around old town in a tuk-tuk -- a common mode of transport in the Thai capital.

"It's the most special thing. I'm close to a world-class racer," one man wrote on Twitter while posting a selfie of him with Marquez in the background.

The reception and energy are a blessing for the riders of MotoGP, which sees Southeast Asia as a growth region. Malaysia hosts a race later this year and there is a huge fanbase in Indonesia.

Promoters expect more than 100,000 people to descend on Buriram over the weekend.

Nestled in a part of the country where rice paddies and water buffaloes are a common vista, the town has pumped money into sports to boost the economy.

Stands started to fill up on Saturday in anticipation of the afternoon's all-important qualifying sessions."

"It's good that we come here more times," seven-time champion Valentino Rossi, who also has a local following, told reporters the day before.

"The passion for MotoGP is very high."

Pornrathee has met other Thais who descended on Buriram from across the country, from the island of Phuket in the south to Chiang Mai in the north.