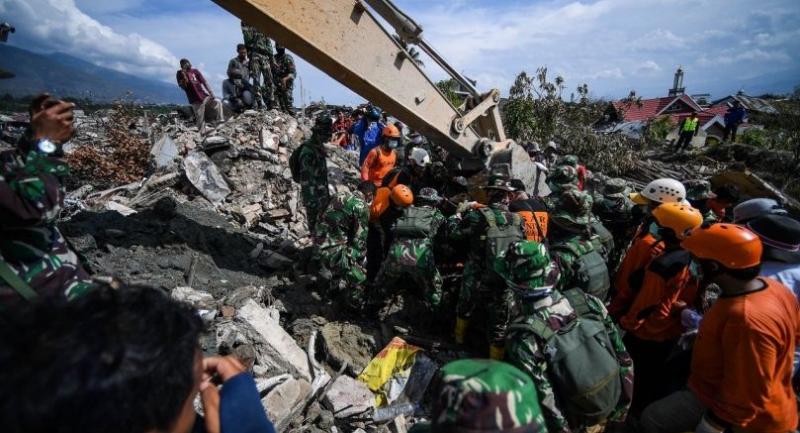 Indonesian rescuers recover bodies from the debris at Perumnas Balaroa village in Palu in Central Sulawesi on October 6, 2018, following the September 28 earthquake and tsunami./AFP

Wearing masks to ward off the stench of death, Indonesian soldiers trudge over mountains of mud and concrete, moving slowly as they poke and prod the wreckage.

Eight days after a quake-tsunami disaster erased parts of Palu on Sulawesi island, this is no longer a search for the living, but a collection of the dead.

They don't have to look very hard.

Sergeant Syafaruddin, from an army unit in Makassar south of Palu, asks for a body bag.

He is standing near the remnants of an Islamic school, and two of his soldiers have emerged from the ditch with a body bag sagging in the middle.

The load is too light for a corpse -- they say they found just the heads of two adults and a child.

"There are no survivors here. We just find bodies, everyday," says Syafaruddin, who like many Indonesians goes by one name.

There are no signs of life peeking from beneath this devastation in Balaroa, where a vast government housing complex was all but swallowed when the sheer force of the quake turned the earth into mud.

There are fears that vast numbers of decomposing bodies could still be buried beneath this once-thriving neighbourhood, perhaps 1,000 or more.

The twin disasters are already known to have killed more than 1,500 people, and counting.

Desperate to find any sign of 11 missing relatives, Rahmat Riadi spots a photograph amid the rubble, then another, and another.

He finds the torn pages of a family photo album -- perhaps the only trace of loved ones he will ever recover.

None of Riadi's still-missing family has been seen since the disaster carved a path of destruction through Palu.

His sister Hermawati points to a spot amid the carnage. She thinks their home once stood there -- she can only guess its position from a familiar tree. There is nothing else recognisable left in the vast wasteland of debris.

The area is strewn with shards of her past life -- a shoe, some text books, a smashed cup, a set of measuring spoons.

Around her, troops in camouflage fatigues and floppy hats to shield them from the unyielding tropical sun clamber past in wellington boots.

They start digging afresh, but it is not long before they need to call in a digger.

It swoops a few times and with almost no effort brings up the body of a long-haired woman buried in mud.

In Petobo, another hard-hit district in Palu, the mud is hardening as the days pass by, frustrating an already herculean effort to find the dead entombed below.

Teams struggle to extract bodies from the muck, often dislodging limbs loosened by decomposition after more than a week exposed to the elements.

They must drag the bodies hundreds of metres to waiting trucks, unable to traverse the morass, as authorities up in the hills of Palu bury hundreds of other bodies.

Many will never be found. The government plans to declare the worst-hit zones as mass graves, the victims forever entombed in mud.