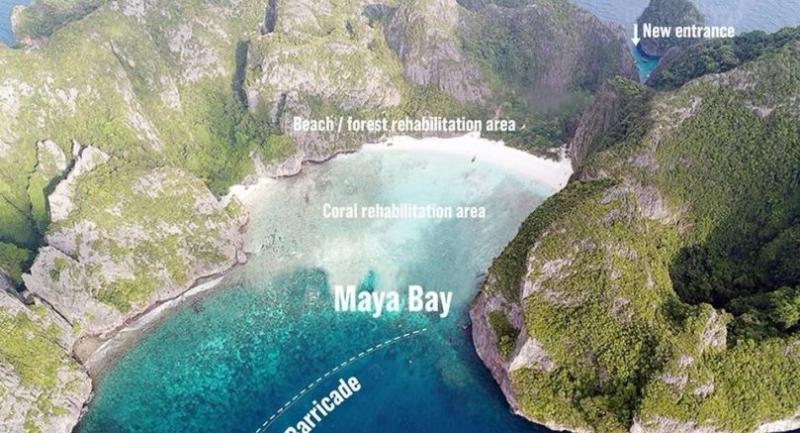 Various rehabilitation zones at Krabi's Maya Beach are shown. A new pier will be built behind the bay to facilitate rehabilitation of coral reefs damaged at the front due to tour boats mooring above them for decades. CR:FBThon Thamrongnawasawat

MARINE ECOLOGISTS have urged the tourism sector to desist from pressuring authorities for an early reopening of the world-renowned Maya Bay in the southern island province of Krabi so as to ensure a proper rehabilitation process.

Meanwhile, local tour operators affected by the closure will meet tomorrow to discuss their next move as the peak tourism season draws near.

On September 28, the National Parks Department issued an order for indefinite closure of Maya Bay in order to allow more time for damaged coral reefs to recover.

Experts said the four-month closure of Maya Bay was insufficient for rehabilitation due to the popular site’s fragile ecosystem.

Assistant Professor Datchanee Emphandhu of the Forestry Faculty of Kasetsart University, said Maya was like a seriously ill patient who needs more time to recover. Rushing to reopen the place would result in the likely collapse of its ecosystem, she warned, adding, “The damage could be irreversible.”

She was speaking in response to a call by tour companies in the area to reopen the destination once the tourism industry enters the high season later this year.

On September 28, an official announcement was made in the Royal Gazette about the indefinite closure of Maya Bay from October 1, after the previous closure order was supposed to end on September 30.

One of the world’s most-visited tourist destinations, made popular by the Hollywood movie “The Beach”, Maya Bay’s limited 30-rai (4.8 hectares) area, attracts about 5,000 tourists per day on average, or about 1 million visitors per year.

The National Parks Department, after holding consultations with its advisers and marine experts, said earlier that Maya Bay had been seriously environmentally degraded because of overcrowding.

The department has allowed boats to bring tourists to watch Maya only from a distance while officials work on rehabilitating the area and its fragile ecosystem, including the damaged coral reefs that need more time to regrow.

Marine ecologist, Sak-anan Plathong, from Prince of Songkla University, suggested that the department ensure protection of the fragile ecosystem at Maya Bay and prevent further disturbance to the fragile beach forests inside the nearby island.

An elevated boardwalk over the fragile sand and forests should be built to help reduce pressure on the ecosystem. If there is going to be a reopening of the beach, it should be delayed beyond the high tourist season, maybe a month or two after the season.

In addition, the beach should be given one or two days’ break per week to allow natural replenishment of sand on the beach. The number of visitors, he added, should also be restricted.

Assistant Professor Thon Thamrongnawasawat posted on Facebook that the front of the bay should be off limits forever to allow corals to rehabilitate and regrow otherwise all the efforts invested now would become useless. The department is in the process of procuring projects to build a boardwalk and a new floating pier at the back of the island so that coral reefs at the front of the beach will not be disturbed. The department has also commissioned four universities to conduct research on the appropriate number of tourists who should be allowed to visit six popular beach destinations in Thailand: Samet islands in Rayong province; Surin, Similan and Tapoo islands in Phang Nga province; Chang island in |Trat province; and Lanta island in Krabi.

Meanwhile, Krabi tourism stakeholders, affected by the closure of Maya Bay, will meet tomorrow to discuss the next move.

According to Rong Phukaoluan, president of the Krabi Hotel Association, the tourism operators are ready to meet the conservation authority halfway.

“Instead of closing May Bay all year round, we want the authority to consider allowing tourists to the bay during the peak season and close it in April,” said Rong.

The peak season lasts from November until February, he said. Usually during the high season, Rong added, 60,000 hotel rooms in Krabi receive visitors. Each year the province welcomes as many as 5 million visitors.

Closing the bay would not only affect tour operators in Krabi but also in Phuket, said Rong. The bay, which is part of Had Nopparat Tara-Mu Koh Phi Phi National Park in Krabi, is halfway between the two provinces.

And the bay receives as many as 600 speedboats from the two provinces combined daily, he said.

“In Krabi there are about 60,000 rooms, but in Phuket there are many hundreds of thousands,” he said. Rong said Chinese tour groups often book a night at Phuket before going to Maya Bay. However, Phuket’s tourism this year looks even grimmer than Krabi, considering the Maya Bay closure, the recent boat tragedy and an unsavoury incident at the airport, he said.

The boat tragedy, which happened off Phuket Island, claimed dozens of lives, mainly Chinese, while the airport incident involved an airport guard, who slapped a Chinese tourist.