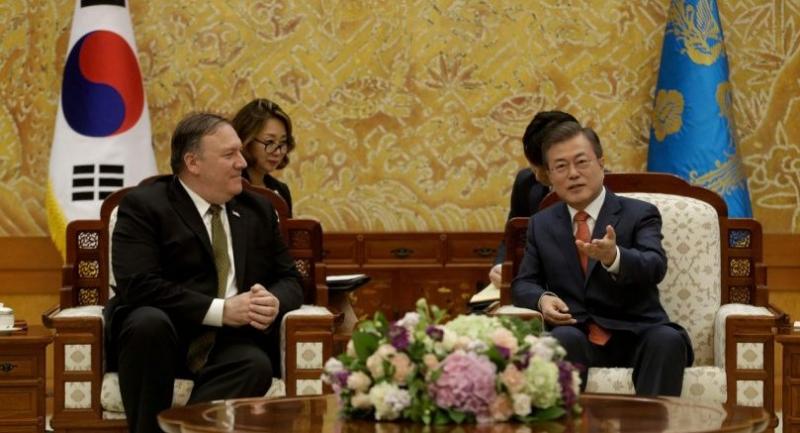 South Korean President Moon Jae-in (R) meets with US Secretary of State Mike Pompeo during a meeting at the presidential Blue House in Seoul on October 7, 2018./AFP

Kim Jong Un has agreed to hold a second summit with US President Donald Trump as soon as possible, Seoul said Sunday, after Washington's top diplomat held "productive" talks on denuclearisation with the North Korean leader in Pyongyang.

US Secretary of State Mike Pompeo met with Kim on Sunday morning for around two hours of talks followed by a lunch in the North's capital, before flying to Seoul on a whirlwind diplomatic visit to the region.

Pompeo said "he agreed with Chairman Kim to hold the second US-North Korea summit at the earliest date possible", South Korea's presidential office said in a statement, although no specific time or location has yet been agreed.

Pompeo and Kim also discussed "denuclearisation steps that will be taken by North Korea and the issue of attendance by the US government," as well as "corresponding measures" to be taken by the United States, the statement said.

The visit was Pompeo's fourth to North Korea.

Trump met Kim in Singapore in June for the first-ever summit between the two countries, resulting in what critics say was only a vague commitment by Kim towards denuclearisation of the Korean peninsula.

"We continue to make progress on agreements made at Singapore Summit. Thanks for hosting me and my team," Pompeo tweeted.

Kim also praised their "nice meeting", telling Pompeo via an interpreter following the morning's talks that it was "a very nice day that promises a good future... for both countries".

The North Korean leader also invited inspectors to visit the Punggye-ri nuclear test facility, which Pyongyang took apart in May, "to confirm that it has been irreversibly dismantled", according to a State Department readout of the meeting.

Since the Singapore summit, the road towards warmer ties has been bumpy.

Washington and Pyongyang have sparred over the exact terms of the vaguely-worded agreement in Singapore, with the US pushing to maintain sanctions and pressure against the North until its "final, fully verified denuclearisation".

Last month, the North's foreign minister told the United Nations there was "no way" his country would disarm first as long as tough US sanctions remain against his country.

After a previous visit to Pyongyang in July, Pompeo had said the two foes made progress on key issues -- but within hours of his departure the North condemned "gangster-like" demands from the US, raising questions over how much the two sides really saw eye to eye.

Another planned trip by Pompeo to Pyongyang was scrapped after what Trump said was insufficient progress towards implementing the terms of the Singapore declaration.

An official on Sunday's latest visit to Pyongyang with Pompeo said the trip was "better than the last time", but added: "It's going to be a long haul."

Following his arrival in Seoul from Pyongyang on Sunday, Pompeo said at a meeting with South Korean President Moon Jae-in that he had "a good productive conversation" with Kim, in talks which represented "another step forward".

The dovish Moon, who held three summits with Kim this year and also brokered the Trump-Kim summit in Singapore, said Sunday the "whole world" was watching with keen interest the outcomes of Pompeo's trip.

"I hope your trip to North Korea and the upcoming second US-North Korea summit will provide a good opportunity for achieving irreversible, decisive progress in terms of denuclearisation and the peace process on the Korean peninsula."

"North Korea took some steps towards denuclearisation and the US will face criticism from the international community if it continues to demand complete denuclearisation without any lifting of sanctions," said Yang Moo-jin, a professor at the University of North Korean Studies in Seoul.

"We can't rule out the possibility that Washington... may move in the direction of partial easing of sanctions based on progress in denuclearisation," he said.

In exchange, the United States would declare a formal end to the 1950-53 Korean War -- which concluded with an armistice rather than a peace treaty -- but North Korea would stop short of delivering an exhaustive list of its nuclear facilities, she said.