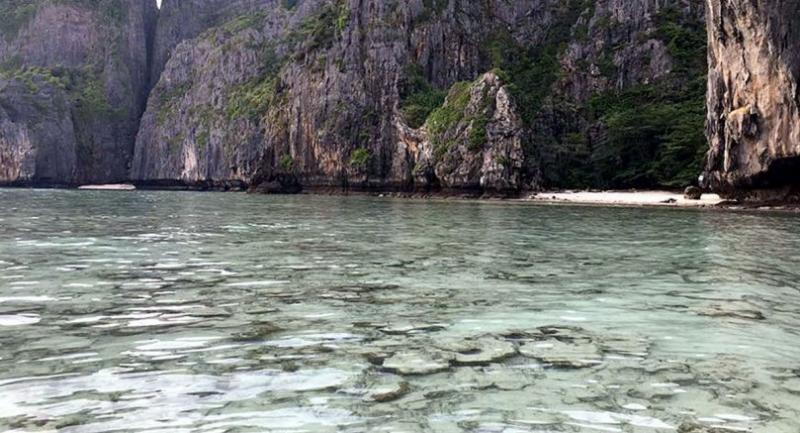 THE CORALS at Maya Bay are not strong enough yet to withstand the influx of visitors, National Park, Wildlife and Plant Conservation Department (DNP) explained as the reason for the indefinite closure of the bay. Though the iconic tourist attraction in Krabi’s Had Nopparat Tara-Mu Ko Phi Phi National Park has been off limits for four months to facilitate coral reef restoration, there have been only slight signs of coral recovery, according to the assessment of experts at the site. The experts said that this was because of the decades of damage inflicted on the coral reefs at Maya Bay by tourism activities, so the reefs needed more time to recover and gain enough strength to endure the impact of tourism before the bay could be reopened. DNP’s National Parks Office director Songtam Suksawang said evaluation of the coral reef restoration efforts at Maya Bay found very little improvement in the condition of the reefs and the ratio of dead corals to living corals was still more than two to one. “The coral reefs at Maya Bay can be divided into three sections: the first section at the shallow reef flat on the North of the beach, the second section at the shallow reef flat on the beachfront, and the third section at the deep water reef at the edge of the bay,” Songtam said.

“None of these reefs showed a satisfactory recovery rate. Our study found that all three reefs in Maya Bay have a coral growth rate less than 1 per cent compared to before the bay closure period.” According to the DNP’s latest coral reef survey at Maya Bay, it was found that the first section of the reef to the North of the beach had the highest number of living corals at 19.93 per cent, a 0.65 per cent increase after the coral restoration operation was undertaken.

Suphaphon Prempree, the head of the coral reef restoration operation, explained the higher living coral proportion there compared to other sections to lesser impacts from boat traffic and tourist activities.

The second section at the beachfront is still the most damaged area of Maya coral reefs. Only 2.83 per cent of corals in this area are alive, because this section of the reefs had received the most impact from tourism activities, but this area also has the highest increase compared to before the operation at 0.93 per cent.

In the third section of the reef at the edge of the bay, the number of living corals has increased by 0.18 per cent, the lowest recovery rate compared to other parts, making the current proportion of living corals in this area 16 per cent. The DNP allowed The Nation to visit Maya Bay to review progress of the coral reef restoration mission. This reporter found the situation concurred with the DNP study, as the low tide last Sunday afternoon revealed a wide field of white broken corals on the bay’s floor.

According to Supaphon, the ruined part of the reef used to have diverse species of corals and rich marine lives, but the heavy boat traffic in the bay had extensively devastated the reef.

Even though this destroyed reef seems to be lifeless, closer scrutiny reveals some marine life and corals had already sprung back to life.

Mountain corals have regrown in some areas of the first section north of the beach, while many small fish, crabs and sea cucumbers can also be found throughout the reef.

A more surprising scene was on the beach. Maya Bay’s peaceful white sandy beach can be seen in its pristine form, resembling iconic scenes from the movie “The Beach” that had made this spot globally famous in the first place. Pacific reef egrets can be found foraging for food on the beach that used to once bustle with tourists.

Looking at the current condition of Maya Bay’s coral reefs, Supaphon concluded that the resilience and ability of the reefs to recover naturally are still too low to allow the reopening of the bay to tourists.

“The recovery rate of the coral reefs will gradually increase over time, if we leave the reefs alone to let them rest and naturally recover themselves,” she said. “Considering the rate of restoration and the level of damage the reefs have suffered, I am sure Maya Bay’s coral reefs can be restored to their former beauty by just letting nature heal itself, but this will require decades of limiting human activities in the bay area.”