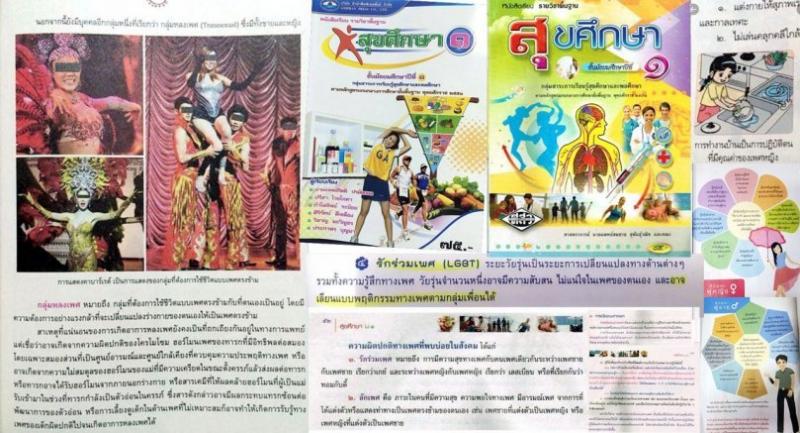 LGBT CAMPAIGNERS yesterday stepped up their efforts to prevent homophobia being encouraged by school textbooks across the country. “Students are learning from these textbooks that we [LGBT] people are abnormal,” said Parit Chomchen, who along with Suphanut Aneknumwong handed letters to the Committee for Consideration of Unfair Gender Discrimination (Wor Lor Por) asking for it to scrutinise all health education books used in Thai secondary and high schools. They hope that the verdict of Wor Lor Por, which operates under the wing of the Ministry of Social Development and Human Security, will force the Education Ministry-run textbook committee to scrap the offending books. Usually, Wor Lor Por takes about 8 to 10 months to handle such cases.

The books are approved by the Education Ministry committee and used in about 30,000 secondary and high schools across Thailand.

One health education textbook for grade 8 students, for example, advises parents to “take their LGBT kids to psychiatrists” to “know and act according to the appropriate and normal gender roles”. It also shows a very limited view on gender roles. Women are supposed to “wear skirts, be gentle, take good care of their appearance and be interested in cooking, housework, knitting, and flower arrangement.”

Men, on the other hand, should wear pants, and play adventurous sports such as boxing and football. The textbooks created problems, said Suphanut, a grade 6 student who also handed in a separate letter to Wor Lor Por yesterday morning to scrutinise the books as he been a victim himself. “I am straight but I don’t play football and am not that ‘manly’. I am different from what is believed to be a man, that’s why my friends think I’m not straight and I was even a target for bullies,” he said.

Health education textbooks are either published by, or regularly reviewed by, the education ministry, said Nitsuda Apinunpaporn, head of the committee responsible for textbooks.

Nitsuda said the health education books that had gender-discriminatory content were produced before the rise of LGBT movements.

“The problematic books were written before the Gender Equality Act was enforced in 2015. The ones we have reviewed are free of that biased content,” she told The Nation, but added that some old books were still in the system.

However, the LGBT community disputed her claim that the books with biased content had been removed. “The books that are still being used by schools still foster gender discrimination against LGBT people,” said leading LGBT activist Naiyana Suphapung. “The health education textbooks advise students to keep their LGBT friends at arm’s length. The discriminatory content is still there,” she said.