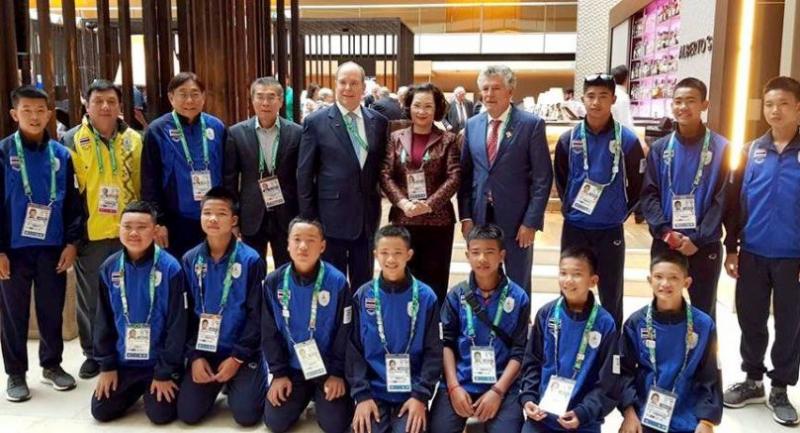 Members of the Mu Pa Academy football team are granted an audience with Prince Albert II of Monaco, standing fifth from left, at the Youth Olympic Games in Buenos Aires recently. The prince is a member of the International Olympic Committee (IOC).

THERE ARE no plans yet to reopen the world-famous Tham Luang cave in Chiang Rai province where 12 Mu Pa (Wild Boars) footballers and their deputy coach were trapped in late June, a senior official of the National Parks, Wildlife and Plant Conservation Department said recently.

However, in December, the public will be allowed to visit the surrounding areas inside Tham Luang-Khun Nam Nang Non Forest Park but not the cave, deputy director-general Chongklai Worapongsathorn said.

“The Mineral Resource department’s team will inspect the cave early next year to see if it would be safe for the public to visit. However we cannot say for certain how long the inspection will take or when the cave will reopen. It could possibly take more than a year,” he said.

When the cave is reopened, it will be for only a short distance from the mouth of the 10km-long cave, not through to the end like before.

The Mu Pa members disappeared inside the cave in late June after a flash flood blocked their way out. It was revealed after they were rescued that they had to retreat deep into the cave due to the inundation.

Their disappearance triggered a massive international operation to locate and evacuate them from the heavily flooded cave.

The 17-day rescue operation became a symbol of international cooperation and climaxed with a successful evacuation operation.

Lt-Commander Saman Kunan, a former Navy SEAL, was the only casualty of the mission. After the Mu Pa team members were rescued, equipment and other things were left inside the flooded cave.

Chongklai yesterday said that around February, when the cave becomes dry, authorities would be allowed to remove the equipment left inside. It is reported that on average about 3,000 persons visit the forest park during holidays and about 500-1,000 during weekdays.

The landscape of the areas outside the cave that had been damaged during the weeks-long rescue mission have been renovated and modified in preparation for reopening to the public.

The 12 Mu Pa footballers and their deputy coach were this week in Buenos Aires to attend the Olympic Youth Games as special guests of the International Olympic Committee.

They had the opportunity to play football with international youth teams and share their experiences with them.

Narongsak will accept the award on behalf of the Thai rescuers, becoming the first time any Thai has received the award.

Other awardees include the Japanese first responders who risked their lives following the tsunami and nuclear disaster at Fukushima; the founder of the Syrian White Helmets; a global champion for “green cities” – Wang Shi of China; Dr Munjed al-Muderis, a surgeon who has brought new hope for amputees; and the founders of Koolulam, a musical phenomenon that aims to bridge the most difficult ethnic and religious divides.

The group will appear on NBC’s Today Show and the Ellen Show that has Ellen DeGeneres as a host. They will also meet the Thai communities in New York.