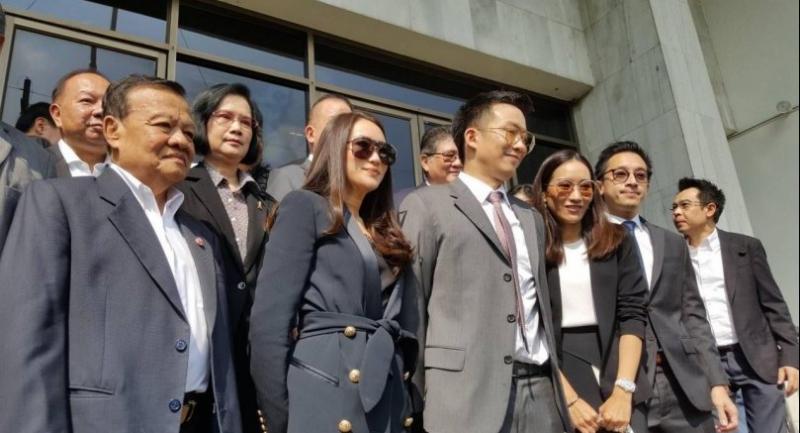 THE SON of former prime minister Thaksin Shinawatra was indicted yesterday for collusion in money laundering in connection with the Krungthai Bank loan scandal, in a case he claimed was politically motivated.

Panthongtae Shinawatra was brought to the Central Criminal Court for Corruption and Misconduct Cases by public prosecutors.

He was indicted for obtaining a cheque for Bt10 million that was part of Bt10 billion in loans that the property group, Krisada Mahanakorn, had got dishonestly from the state-run bank at a time when his father was serving as prime minister.

The court released Panthongtae on a bail of Bt1 million yesterday on condition that he would not leave the country without court permission.

Also, the court scheduled a hearing on November 5 for the defendant to declare formally whether he admitted to or denied the charge against him.

Panthongtae, 38, who is Thaksin’s eldest child, had earlier suggested in his Facebook post that the money-laundering case against him seemed to be politically motivated.

“Pin him down with some criminal case so that he would not be a nuisance in the run-up to the election. That’s my last roar before I meet public prosecutors to hear their decision on indictment,” Panthongtae posted on Tuesday.

“Just in your dreams, Uncle Moody,” he added, seemingly referring to someone in the ruling junta.

Panthongtae also said that he felt he did not get fair treatment from authorities involved in the case, namely the Department of Special Investigation (DSI), the Anti-Money Laundering Office and public prosecutors.

He added that like him, more than 100 other people had also obtained cheques from the same source but they were spared legal action.

Panthongtae appeared at the Office of the Attorney-General in the morning to meet with public prosecutors and later went to the court in the afternoon after being indicted.

“I have no worries. I am still fine,” Panthongtae told reporters. His sisters added that he was “in good spirits”.

In her Instagram message, Paethongtarn said yesterday: “Thaksin’s children often get things worse than others. But you know what, because Thaksin’s flesh and blood runs in us, we will stay strong. Thank you for all the encouragement for [Panthongtae] and our family.”

Co-defendants in the case – Kanchanapa Honghern, the former secretary of Panthongtae’s mother, and her husband Wanchai – who had received cheques for Bt26 million in connection with the loan scandal, did not show up yesterday. Public prosecutors summoned them to hear their indictment order on October 18.

Tarum Chalichandra, a spokesman for the Office of Attorney-General, told a press conference yesterday that public prosecutors had received an investigation report from the DSI regarding 159 people accused of colluding in money laundering, in connection with the loan scandal.

Public prosecutors are studying the investigation report and will inform the public later when they had a decision whether to indict the accused, Prayut Phetkhun, another spokesman for the agency, said at the press conference.

Between 2003 and 2004, Krungthai Bank executives dishonestly approved loans of Bt10.4 billion to Krisada Mahanakorn and its affiliates despite the company’s poor credit rating. The three affiliates involved were later declared bankrupt by a court.

Thaksin was a co-defendant in the case. But he has lived in exile overseas since 2008 after fleeing the country shortly before the Supreme Court’s political-cases division sentenced him to two years in jail for abuse of power.

In September, public prosecutors sued Wichai and five others for money laundering.

On Tuesday, Panthongtae said in his Facebook post that he had learned that people in the government were happy after he flew to Hong Kong over the weekend to meet his father. “They said it would be a relief for them in the next election as all in this family would just flee the country,” he said.

In addition to Panthongtae, many Pheu Thai politicians also flew to Hong Kong to meet with Thaksin, who is referred to as “Big Boss” by many party figures.

Regarding Thaksin’s meeting with Pheu Thai politicians, Prime Minister Prayut Chan-o-cha yesterday said it was the Election Commission’s duty to look into the matter and determine whether that was an act against the relevant law.

“I cannot say who is right or wrong here. It’s more about whether or not it’s appropriate,” General Prayut said. “They have the right to do it but the EC will decide whether it’s legal.”

The Political Party Act prohibits a party from allowing an outsider to influence its internal affairs. And the violating party risks being disbanded if found guilty.