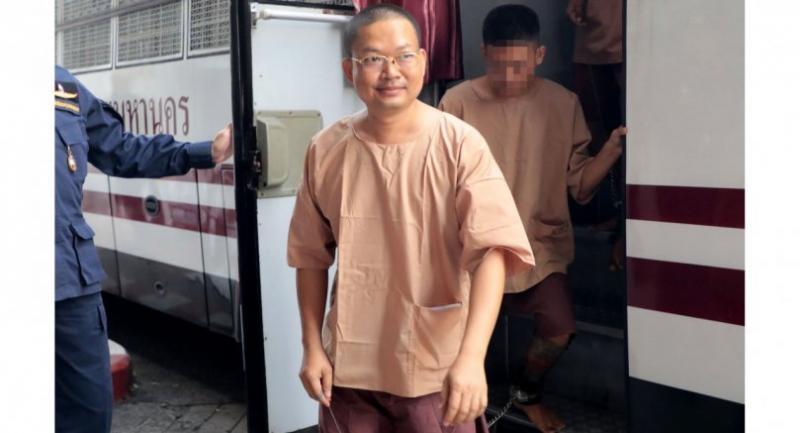 Former monk Wirapol “Luang Pu Nenkham” Sukphol, 39, arrives at Ratchadapisek Criminal Court in Bangkok on Wednesday to hear the verdict in a case involving the rape of a 14-year-old girl from 2000 to mid-2001.

FORMER MONK Wirapol Sukphol, known as jet-setting Luang Pu Nenkham, was given another 16 years behind bars for taking a 14-year-old girl away from her parents and allegedly raping her for nearly two years almost two decades ago.

The Ratchadapisek Criminal Court judge said this 16-year sentence would be added to the 20-year prison term he was given in August over charges of public fraud, money laundering and violation of the Computer Crimes Act. The court also accused the former monk of abusing his status to take advantage of a young girl and tarnishing the religion.

The victim, who is now 32, said she was satisfied with the ruling and will follow up o n the civil lawsuit she had filed at the Si Sa Ket Children and Family Court in 2013, in which she is seeking outstanding child support worth Bt40 million. Her trial was put on hold pending the Criminal Court’s ruling.

The rapes committed between January 2000 to mid-2001 led to the girl getting pregnant. Wirapol had promised her Bt10,000 per month in child support, but the payments stopped after the first few months, she said.

While the Department of Special Investigation was testing the child’s DNA, the former monk fled to the United States. Thailand later asked for his extradition.

Wirapol was extradited last July to face charges, including the charge of raping an underage girl, which was backed by the paternity test that showed 15 matches.

The former monk, who has been in detention since his extradition, still maintains his innocence.

His lawyer said he will study the verdict and discuss it with his client before deciding on an appeal.

In the August verdict, the court also ordered the former monk to pay more than Bt28.6 million to 29 damaged persons in compensation for duping them into making donations.

The authorities have also confiscated Bt43.47 million worth of assets that Wirapol was not able to explain the origins of.