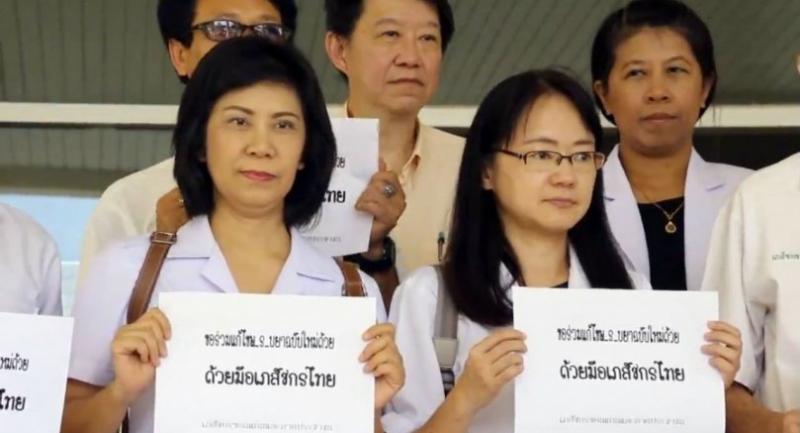 MORE THAN 10 pharmacist networks are demanding that the Food and Drug Administration (FDA) withdraw a draft bill from the ongoing legislative process.

Prepared by the FDA, the Drug Bill has already been submitted to the Cabinet. Pharmacists, however, complain that the bill contains contentious points and needs revision.

“The FDA distorted our opinions when it proposed the Drug Bill to the Cabinet,” Suchita Kulthawaiporn said yesterday in her capacity as chair of the Southern Pharmacist Club.

Suchita said the FDA has wrongly told the Cabinet that her club endorsed the bill.

“If you go ahead with the current version, we will upgrade our protest,” Suchita warned.

“Every time it was submitted to a forum, the details changed,” he said.

He added that when the draft reached the Cabinet, its details again changed from that seen at the last forum, which was held in July.

Suchita said the current version of the Drug Bill would not offer sufficient protection for people.

According to Jaranwit, the bill – if approved – would allow people without adequate knowledge to prescribe drugs and thus put the public at risk.

Many pharmacists suspect that the current drug law has been designed to pave the way for diploma-holders to prescribe drugs at convenience stores without the presence of professional pharmacists. The FDA has so far said it will revise the bill based on comments from pharmacists. “Actually, the FDA and pharmacist networks have the same ideas. But when the draft law is interpreted article by article, there may be some discrepancies,” FDA secretary-general Tares Krassanairawiwong said earlier this week. “On those points, we can revise the Drug Bill in consultation with the Council of State.”

Tares said the draft law’s mention of such pharmacies might upset pharmacists, who are worried that this will also allow convenience stores to easily sell drugs.

“We can address those concerns by stipulating clearly that the permission [to operate without pharmacists] will only be granted to pharmacies that already exist,” he said.

Thailand had traditionally suffered from a shortage of qualified pharmacists, so it began allowing some pharmacies to be operated by diploma holders.

However, today there are more than 30,000 pharmacists in the nation and their networks have been firm against any plan to allow new pharmacies to operate without trained pharmacists.