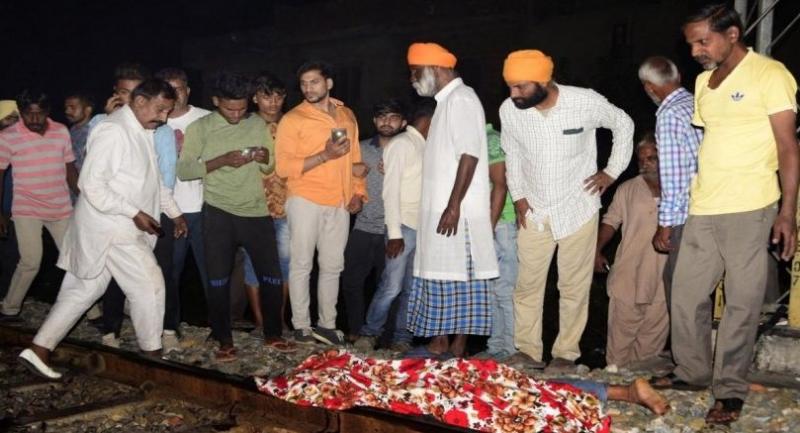 The site where over 50 people glued to watching a burning Ravan effigy while standing on railway tracks were crushed by a speeding train in Amritsar. (Photo: IANS)

Railway authorities in Punjab and New Delhi defended themselves saying that they had not been informed about the Dusshera event at the spot.

The Punjab and Railway Police on Saturday questioned the driver of a train that crushed at least 60 people to death while they were watching the burning of a Ravana effigy from a railway track.

Punjab Police officials said that the DMU (diesel multiple unit) driver had been detained at the Ludhiana railway station and was being questioned regarding the incident that took place on Friday night at the Jora Phatak near Dhobi Ghat within Amritsar city.

Sources said that the driver claimed that he was given green signal and all clear and had no idea that hundreds of people were standing on the tracks when the train crossed the area.

No action has so far been initiated against the organisers, who are leaders of the ruling Congress in Punjab, of the Dusshera event. Police sources said that the organisers had gone underground.

Railway officials were also gathering information from the railway linemen posted along the tracks near the Jora Phatak area who failed to inform the DMU driver regarding the presence of over 700 people on the railway tracks who were watching the burning of the Ravan and other effigies during Dusshera celebrations.

As the Ravan and other effigies went up in flames with the deafening noise of bursting fire crackers, the people standing on the live railway tracks did not realise that a speeding train was approaching.

Nearly 150 people, most of who were watching the burning of effigies or were recording the event on their mobile phones, were mowed down by the train.

The disaster was over in 10-15 seconds, people at the spot said.

According to a Northern Railway spokesperson, the incident occurred at gate number 27 between Amritsar and Manawala, when a DMU (train number 74943) was crossing through the closed gate.

Union Minister of State for Railways Manoj Sinha visited the accident spot late Friday night. Sinha said that the incident was being probed and that the tragedy was unfortunate.

Railway authorities in Punjab and New Delhi defended themselves saying that they had not been informed about the Dusshera event at that spot and the local police did not prevent the people from coming on the railway tracks.

Prime Minister Narendra Modi has approved Rs 2 lakh for the family of the dead and Rs 50,000 for the injured. Punjab Chief Minister Amarinder Singh announced Rs 5 lakh compensation for the deceased and free treatment for the injured. The CM has also ordered an inquiry into the accident.