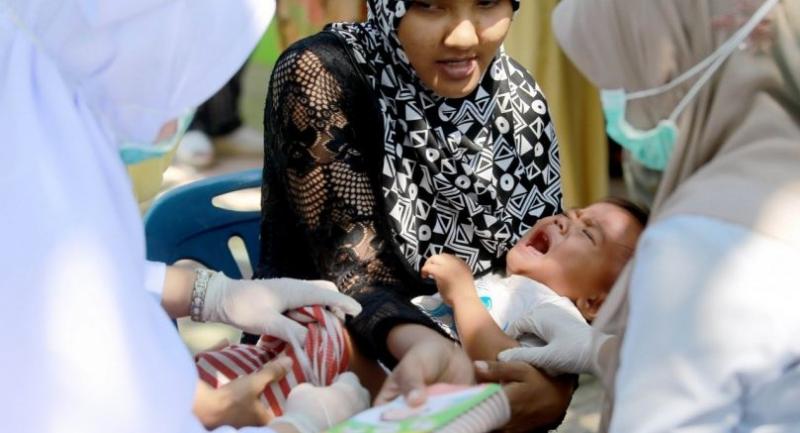 A mother holds her child as nurses at the Tambon Yala Health Promotion Hospital in Yala’s Muang district vaccinate him against measles yesterday. There have been several measles deaths in the province this year. Photo Nakharin Chinnawornkomol

A CHILD SUCCUMBED to measles in Yala province yesterday morning, bringing the number of deaths from the disease in the southernmost province this year to nine, Yala Provincial Public Health Office head Dr Songkran Maichum said.

Three other children are now critically ill with measles at Yala Hospital.

Admitting the disease outbreak in the province was “worrying”, he said his office aimed to have 7,000 at-risk children – especially those aged between five months and five years old - in Yala vaccinated by November 4. He said the main reasons for the fatalities were that the patients had not been brought to hospital early enough, dying from subsequent health complications, and not been vaccinated at an early age.

He also said the 8,000 doses of vaccines available were sufficient, though the office has requested for another batch of 3,000 doses.

Songkran noted that the most-affected districts were Yaha, Bannang Sata and Kabang.

Health officials continued vaccinating young children against measles yesterday. Acting director of Tambon Yala Health Promotion Hospital, Nurse Thelma Doyor, led a team to vaccinate 15 children in Ban Pajo (Moo 3) in Muang district. Aiming to cover the area’s 108 toddlers, the hospital will ask for additional doses so as to cover the rest by November 4, she said. The hospital had previously vaccinated 35 children.

Abdul-Roning Abdulloh, the imam of Ban Pajo Mosque, said he was inviting residents to have their children vaccinated, as he was able to confirm that it is acceptable for Muslims to receive the vaccine. He cited his previous consultation with many Muslim doctors about the vaccine, as some people were afraid that the vaccinations were not in accordance with halal principles.

The imam added that he will tell people during the Friday prayer assembly that vaccines were necessary to protect young children.

Songkran said officials giving the vaccines have been told to download a video clip featuring statements from the Sheikhul Islam Office and Provincial Islamic Committees saying this treatment is acceptable.