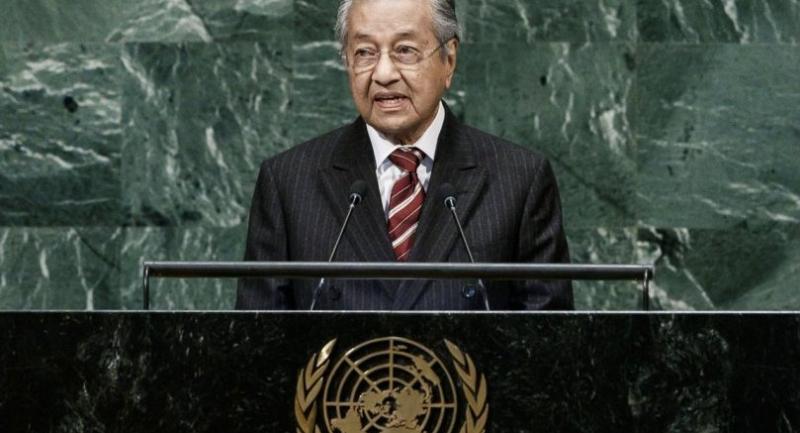 MALAYSIAN Prime Minister Mahathir Mohamad arrives in Bangkok today for a two-day official visit to reaffirm his country’s commitment to bilateral ties. He is scheduled to meet Prime Minister Prayut Chan-o-cha at Government House upon arrival and discuss a wide range of subjects, with peace talks about Thailand’s deep South high on the agenda.

The Thai side is set to introduce its new peace negotiation chief, Udomchai Thamsarorat, while Mahathir will bring newly appointed facilitator, Abdul Rahim Noor, who was once Malaysia’s national police chief.

For Mahathir, violence in the predominantly Muslim South is a wound that is difficult to heal. Since early 2004, more than 7,000 people have been killed after a new generation of Patani-Malay Muslim separatists surfaced.

Initially, a few observers credited the powerful narrative of the Malays of Patani as the source of inspiration for the new generation of separatists. Fingers were also pointed at the divisive then-prime minister Thaksin Shinawatra and his “all-or-nothing” policy. Also a handful of hawkish Thai security officials believed that Kuala Lumpur wanted to turn the clock back to the Cold War.

However, few have tried to understand or appreciate the organic nature of the new generation of fighters or the power of their cultural and historical narrative. Virtually all the combatants now work under the secretive Barisan Revolusi Nasional movement.

Unlike other ethnic minorities in Thailand, the Patani-Malay have refused to embrace the state-constructed identity that is referred to as “Thainess” or khwam pen Thai, because it comes at the expense of their ethno-religious identity.

Naturally, Malaysia is concerned this conflict may expand to its side of the border. Its proximity to Thailand makes it a stakeholder in the conflict, while at the same time limiting what it can do in terms of mediation and facilitation.

It is safe to say that bilateral ties between the two nations have been “functional” – something that has had to be carefully managed because one wrong note – as seen during Thaksin’s administration – could set off a war of words between politicians and security leaders on both sides.

Former Thai diplomat Kobsak Chutikul, who in 1999 shared a car ride from Kuala Lumpur to Hat Yai with then-PM Chuan Leekpai and Mahathir and served as an interpreter, said Thailand and Malaysia are close in many respects and share a long history together. Yet this closeness comes with baggage and certain expectations.

“We are not ideological enemies or grand strategic competitors – we are more like relatives, which makes the relationship both strong and fragile,” Kobsak said.

“This relationship has to be constantly tended to and never taken for granted because a thoughtless gesture or an unsaid word can be easily misinterpreted.”

Mala Rajo Sathien, a senior lecturer from the University of Malaya, pointed out that “cross-border” ties existed long before there was a border, and it is unfortunate that “we look at people mostly as citizens or subjects of a nation-state – enclosed strictly within the borders of the nation.

“But history shows that their existence predates the nation-state,” Sathien said, adding that the two countries should never overlook the potential of people-to-people relations across the border as a bridge for peace.

Sathien and Rosenun Chesof, another University of Malaya academic, recently co-authored a book, “Siamese in Malaysia: Beyond Sixty Years of Heritage”, to highlight this special link between the two people.

While the ethnic Thai community in Malaysia has achieved a level of comfort, the ethnic Malays who are concentrated in Thailand’s three southernmost provinces are still negotiating terms for a peaceful coexistence. The ongoing armed conflict is an extension of that negotiation process.

Thailand and the Patani-Malay appeared to have established a level of comfort in the first 50 years after the border was drawn at the turn of the century. However, that went out the window when Thai nationalism and the government’s policy of assimilation were rejected by the Patani-Malays in the 1960s with the emergence of armed separatist groups.

In early 2013, the government of Yingluck Shinawatra launched peace talks facilitated by Kuala Lumpur. Yet, five years later, Thailand and the Malays of Patani have still not been able to identify the terms for peaceful coexistence.

At a time when the region’s leadership appears to have turned towards authoritarianism, Mahathir – whose leadership style has not been without controversy – comes across as a breath of fresh air in Southeast Asia.

The Malaysian leader, who sticks to Asean’s long-standing tradition of non-interference, has made known his disappointment in Aung San Suu Kyi for not speaking out against the atrocities committed against the Muslim Rohingya.

And while China has succeeded in building a strong presence in Asean, Mahathir has proved that he is not afraid to go against Beijing if he believes his position will benefit Malaysia’s stability and international standing.

He sent a strong message of defiance to China by scrapping a high-speed train project as well as releasing 11 Uighur detainees – who had broken out of Thailand’s immigration detention centre and were caught in Malaysia – and allowing them to travel onward to Turkey. These actions would be extremely rare among other Asean leaders.