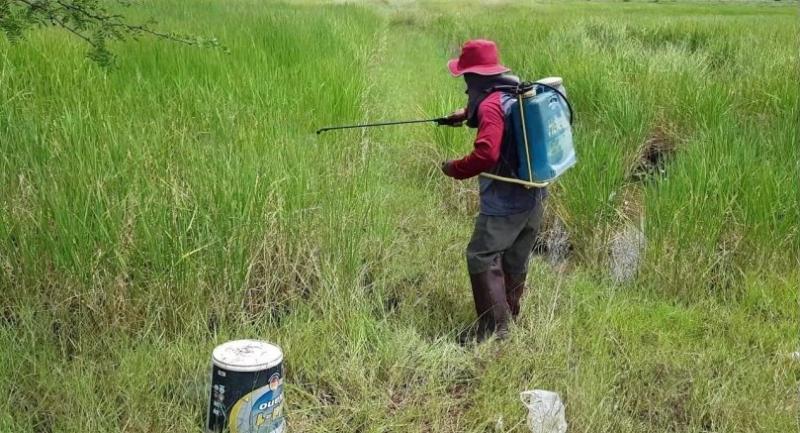 FARMER GROUPS expressed their concern that agrochemical control measures proposed in the new ministerial regulation will turn them into criminals, as they will be forbidden from spraying herbicides on their farms without proper training.

They were conveying their apprehensions yesterday at a public hearing arranged by the Agriculture Department on the draft of the Agriculture and Cooperatives Ministry regulation to enforce tighter controls on the use of paraquat, chlorpyrifos and glyphosate.

The group, who support the free use of these three farm chemicals, said the new control measures were too strong and impractical hence they should be lifted entirely or at the least their enforcement delayed.

Meanwhile, opponents of the use of paraquat, chlorpyrifos and glyphosate revealed that they had been left out of the public hearing. They said the Agriculture Department had not formally invited them to the forum and they were yet to see the ministerial regulation draft and read the new agrochemical control measures.

Sukan Sangwanna, the secretary-general of the Federation of Safe Agriculture that opposes tighter controls, said the new regulation contained many unrealistic agrochemical control measures. For instance the users of paraquat, chlorpyrifos and glyphosate will have to get safety training and acquire the certificate within 90 days of the official announcement of the new regulation.

“This is very big problem for us, as there are more than 5 million farmers and over 200,000 herbicide and pesticide sprayers nationwide, so there is no way that the authorities will be able to train all these people within a very short period of 90 days,” Sukan said.

“And if they do not get the certification in time, the farmers may be arrested and punished just for spraying these three chemicals on their farm.”

He also pointed out that even before tighter control on paraquat, chlorpyrifos and glyphosate is enforced, the prices of these common herbicides and pesticides had already spiked. He urged the Agriculture and Cooperatives Ministry to find a way to keep the cost of these farm chemicals affordable for poor farmers.

He said his organisation and other farmer groups were now gathering comments on the ministerial regulation draft and would submit them directly to the Hazardous Substance Committee to let the committee reconsider the entire agrochemical control measures. He urged that they allow free use of these chemicals.

Meanwhile, BioThai Foundation director Withoon Lienchamroon said his organisation had not had a chance to participate in the public hearing on the new ministerial regulation draft, as the Agriculture Department had not invited his or other organisations that were opposed to the use of the hazardous farm chemicals.

“Despite BioThai Foundation being one of the stakeholders on this issue, as we have been actively campaigning to ban paraquat and chlorpyrifos and limit the use of glyphosate from the beginning, we were not invited to this public hearing,” Withoon said.

“This shows a serious lack of transparency in the ministerial regulation draft. The Agriculture Department should have invited all stakeholders to consider the controlling measures for these hazardous farm chemicals together.”

Nevertheless, he insisted that though the regulations on the use and contribution of these three farm chemicals are becoming stricter, they are still not enough to prevent adverse impacts to the environment and public health.